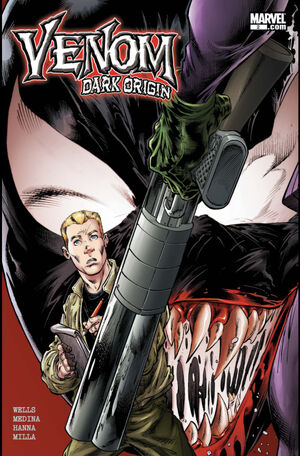 When a man claiming to be the Sin-Eater -- the serial killer tormenting Spider-Man and all New York City -- contacts the young Eddie Brock at the Daily Globe, Eddie takes his shot at career-making news. Who cares if the story’s full of holes? Watch the corruption that poisons Eddie’s soul until it’s as black as a certain alien symbiote…and witness the creation of one of Spider-Man’s great foes! By writer Zeb Wells (AMAZING SPIDER-MAN) and artist Angel Medina (SENSATIONAL SPIDER-MAN)!

Retrieved from "https://heykidscomics.fandom.com/wiki/Venom:_Dark_Origin_Vol_1_2?oldid=1466294"
Community content is available under CC-BY-SA unless otherwise noted.