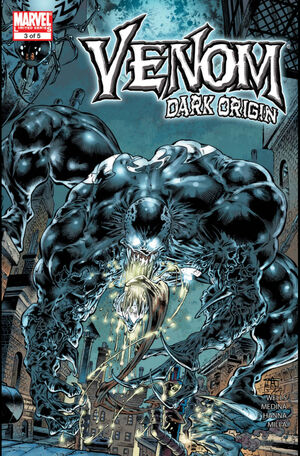 “Amid the chaos, there comes a costume--!” On an alien world, at the behest of an all-powerful megalomaniac, armies of heroes and villains face off in one of the greatest conflicts in Marvel history…and Spider-Man is there! As failed journalist Eddie Brock sinks deeper into the poisonous depths of his soul, the hero who ruined his life comes back from the Secret Wars with a living, breathing alien symbiote. Writer Zeb Wells (AMAZING SPIDER-MAN) and artist Angel Medina (SENSATIONAL SPIDER-MAN) chronicle the twin corruptions doomed to bring together a wreck of a man and a jealous monster to form one of Spider-Man’s deadliest foes!

Retrieved from "https://heykidscomics.fandom.com/wiki/Venom:_Dark_Origin_Vol_1_3?oldid=1466296"
Community content is available under CC-BY-SA unless otherwise noted.