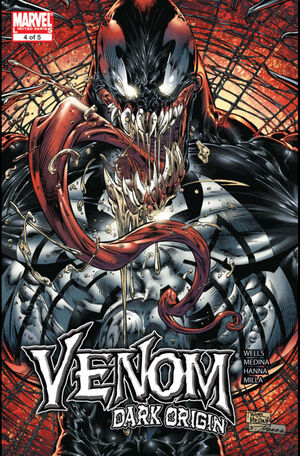 Eddie Brock’s dishonesty and his humiliation at the hands of Spider-Man have poisoned his soul. But it’s the strange new costume that’ll give him the strength to strike out! Now Eddie’s about to discover just where this living alien symbiote comes from…why it possesses the powers it does…and what privileged secrets it can teach him about the man behind Spider-Man’s mask! Discover the never-before-seen truth about Venom’s past and the symbiote's home planet! By Zeb Wells (AMAZING SPIDER-MAN) and Angel Medina (SENSATIONAL SPIDER-MAN)!

Retrieved from "https://heykidscomics.fandom.com/wiki/Venom:_Dark_Origin_Vol_1_4?oldid=1466298"
Community content is available under CC-BY-SA unless otherwise noted.