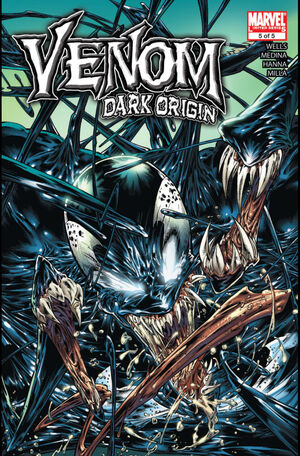 There’s no turning back now. The symbiote has finally and fully bonded with Eddie Brock’s DNA, blackening his heart, tarring his soul. Now the man reborn as VENOM sets out for revenge! Discover the humanity behind the classic Amazing Spider-Man #300, as a twisted, corrupted human being crosses the final line, and Spider-Man and his monstrous new arch-enemy Venom meet face-to-face for the first time…in a battle that would rock comics for decades to come! By Zeb Wells (AMAZING SPIDER-MAN) and Angel Medina (SENSATIONAL SPIDER-MAN)!

Retrieved from "https://heykidscomics.fandom.com/wiki/Venom:_Dark_Origin_Vol_1_5?oldid=1466300"
Community content is available under CC-BY-SA unless otherwise noted.