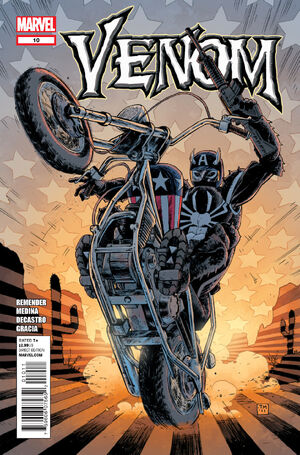 NEW DIRECTION. NEW ARTIST. OLD SOLDIERS. Rick Remender welcomes Lan Medina (PUNISHER) with AMERICAN BADNESS! SPIDER-ISLAND has changed everything and now the death of a loved one reminds Flash Thompson that his secret identity is in the hands of the villainous Crime-Master – and the only way to take his life back is to go rogue. But CAPTAIN AMERICA is out to shut him down. It’s a good old fashioned road trip with Flash Thompson and an alien symbiote!

Retrieved from "https://heykidscomics.fandom.com/wiki/Venom_Vol_2_10?oldid=1651112"
Community content is available under CC-BY-SA unless otherwise noted.