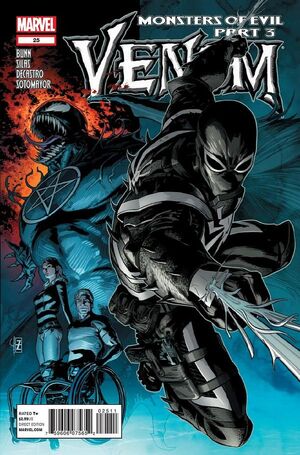 IT’S VENOM VS. THE MONSTERS OF EVIL WITH THE FATE OF HIS SOUL IN HIS HANDS! • Meanwhile, the effects of Savage Six are still being felt in the life of Flash Thompson! • Cullen Bunn and Thony Silas up the supernatural ante – with the world hanging in the balance!

Retrieved from "https://heykidscomics.fandom.com/wiki/Venom_Vol_2_25?oldid=1732690"
Community content is available under CC-BY-SA unless otherwise noted.