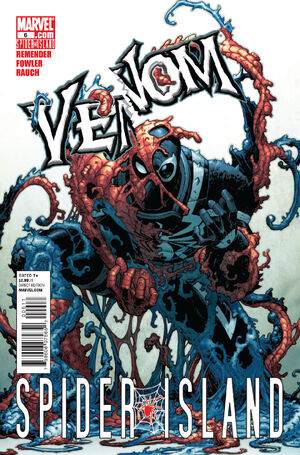 SPIDER-ISLAND TIE-IN! Flash Thompson is dropped into Ground Zero of the Infestation – but will he lose control of his emotions (and the Venom Symbiote) when his own father lies dying in the hospital? Tom Fowler (AGE OF HEROES) joins Rick Remender (X-FORCE) for part one of Venom's foray into Spider-Manhattan!

Retrieved from "https://heykidscomics.fandom.com/wiki/Venom_Vol_2_6?oldid=1731047"
Community content is available under CC-BY-SA unless otherwise noted.