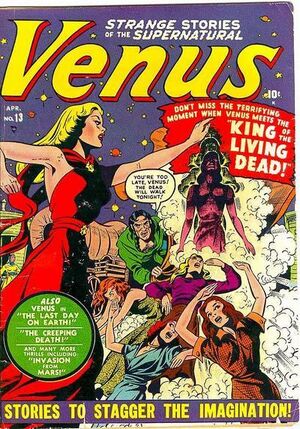 Appearing in "King of the Living Dead!"Edit

Synopsis for "King of the Living Dead!"Edit

Whitney Hammond is reading a newspaper headline about yet another woman who has robbed a jewel shop and has no recollection of why she did it. The only connection to the wave of mysterious crimes is that they all went to Roberto's Beauty Salon. Hoping this will make a good story for their magazine, Whitney sends Venus off to investigate the salon. Venus goes to the salon and makes an appointment for the next day with Ramon. After Venus leaves, Ramon talks to his assistant Conrad and they plot to make her their next victim.

Later that evening, Venus travels to Olympus to meet with Jupiter for assistance. Jupiter can only confirm to her that Roberto is hypnotizing the women and making them commit the robbery, but cannot aid her in stopping him. Venus thanks Jupiter for his help but asks for Thor to protect her should she need it. Venus returns to Earth, and goes to her appointment the next day. As she is in the hair drier, she suddenly falls asleep. With Venus asleep, Roberto has Conrad put Venus in a laundry cart while his wife Myra -- who has copied Venus' appearance using a magic mirror -- then goes out to pose as Venus to scope out a department store.

As Myra, posing a Venus, leaves the salon she runs into Della Mason. When Della tries to talk to "Venus", she is snubbed. Finding this suspicious, Della returns to the offices of Beauty Magazine and tells Whitney what happened. Whitney does not understand why Venus is acting out of character, so Della goes to inform the police. Meanwhile, miles away in a gypsy wagon, Roberto and his allies have all the kidnapped women in a zombie like trance. Roberto uses his hypnotic powers to try and force Venus under his control but finds the woman oddly difficult to put her under his power. Seeing this, Jupiter summons the power of Thor to bring Venus back to Olympus. There, Venus is free from Roberto's control and Jupiter tells her that Mercury has discovered that Roberto is in love with a woman named Vanya, a member of his Gypsy tribe and that she might be the key to defeating Roberto.

Venus returns to Earth and pretends to be under Roberto's power. Roberto sends Venus to a jewelry store to rob it. Venus purposely fails to do so and returns back to Roberto empty handed. As Roberto scolds Venus, Vanya enters the wagon and warns him not to harm any of the girls. Alone with Vanya, Venus convinces her to help stop Roberto's mad plot, Vanya agrees and helps smuggle Venus out of the camp. Hours later, Venus returns with what appears to be a new victim for Roberto's process.

Roberto and his allies eagerly put the woman through the brainwashing process which easily enthralls the new woman. Venus then reveals that the woman was really Vanya in disguise. Horrified that he has turned his true love into a mindless zombie, Roberto recants his criminal ways. When Venus tells Roberto if he expresses his true love for Vanya she will be free from his control. When Roberto kisses Vanya, she is freed from his control.

Back at the offices of Beauty Magazine, Venus tells Whitney the whole story and that how after Roberto realized the errors of his way, freed the other women and promised to turn himself in and focus on the carnival and his salon after he does his time.

Appearing in "The Last Day on Earth!"Edit

Synopsis for "The Last Day on Earth!"Edit

In 1946, Major John Dark is dismissed from his post for trying to pose as a General and embezzeling money from the military. Furious, John Dark decides to get revenge and spends the following years working on his own mechanical army to attack on the United States. In 1951, Dark's niece Sally tracks down Venus and tells her that she suspects that her uncle is up to something sinister. Venus agrees to meet with John. John tells Sally that his activities are none of her concern and then invites Venus to see his work. However, this is a trap and John Dark reveals that he knows who Venus really is and traps her in a room, telling her that he will soon unleash his master plan on the world.

However, Venus is not trapped, she uses her powers to return to Olympus and ask Jupiter for help. Jupiter agrees to let her get the assistance of Mars and Thor to stop John Dark's plans. Venus then teleports back to Earth and confronts John Dark in his control room. Dark tells Venus it is too late and he activates his machines, unleashing an army of robotic tanks that then attack New York City. Venus then summons Mars and Thor. Mars tries to appeal to Dark's former pride in servince his country in the military but Dark refuses to listen. Thor then begins unleashing lightning to destroy the tanks. Venus tries one last time to appeal to Dark's former pride in his country, but he refuses to listen and Thor is forced to destroy the lab with a lightning bolt, killing John Dark in the process. Venus searches the rubble but finds that the only thing that survived the blast is a lone American flag.

Appearing in "Invasion from Mars!"Edit

Synopsis for "Invasion from Mars!"Edit

Appearing in "The Creeping Death"Edit

Synopsis for "The Creeping Death"Edit

In a lake out in the North Woods, a pair of fishermen pull out a strange find: a large oyster shell. As oysters are not common to the area, the two men bring the strange find back to their cabin. When they pry it open with a crowbar they are shocked to find a strange gelatinous mass come out of the shell and begin consuming everything in the cabin. Unable to stop the creature they flee in order to get health.

Soon at the offices of Beauty Magazine, Whitney Hammond and Venus learn about the so-called Creeping Death, spreading across the country and that a state of martial law has been declared. The pair decide to go an investigate the story as a feature for Beauty Magazine and take a private plane out to the area where the creature has been expanding. When they arrive in the area they are horrified to find that the Creeping Death has grown to a massive size. Before landing their plane at a nearby airfield they watch helplessly as American bombers and tank try a futile effort to destroy the mass, succeeding only in making it bigger.

At the airfield they into reporter Jerry Stone who offers to ride them up to where the mass is currently converging. Along the way, he tells them that reports indicate that unless they stop the creature, it will cover the entire Earth in under 24 hours. After Jerry parks their jeep, Venus slips away and teleports herself to Olympus where she meets with Jupiter to ask for help. Jupiter orders Thor to assist her in stopping the Creeping Death. The two gods return to Earth where Thor fires a lightning bolt at the mass. This causes the creature to suddenly begin contracting, saving Whitney and Jerry in the nick of time. With the creature destroyed, Venus and Whitney are happily reunited.

Retrieved from "https://heykidscomics.fandom.com/wiki/Venus_Vol_1_13?oldid=1466330"
Community content is available under CC-BY-SA unless otherwise noted.