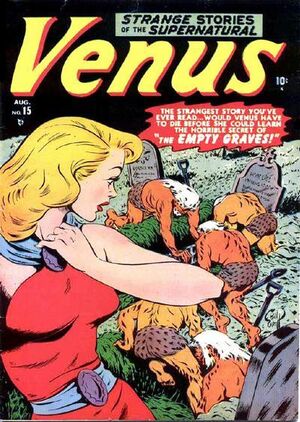 Appearing in "The Graveyard Waxworks"Edit

Synopsis for "The Graveyard Waxworks"Edit

After a series of grave robberies at a cemetery, finally a keep spots the thieves: Strange short and ugly creatures. When the story hits the newspapers, Whitney Hammond sends Venus to cover the story for Beauty Magazine. Venus meets with cemetery officials and organizes a plan to catch the creatures. They put on a phony funeral and bury and empty coffin. Venus then stakes out the spot and when the creatures come out she signals the others who use a car to distract the creatures with it's lights and horns. While the creatures are distracted, Venus then hides in the coffin. The creatures return and take the coffin back to their hideout located in an underground cavern beneath the cemetery.

As it turns out some of the creatures have implanted their brains into the bodies they have stolen and that this body is intended for their ruler Princess Nakima. Venus arises from her coffin and reveals that she is still alive. The leader of the creatures informs her that they are called the Underearth Men. Having grown tired of living below the Earth they have come up with a plan to have their brains placed in the bodies of the recently deceased so they can travel to the surface and take over the world. They are about ready to kill Venus, when she offers her services to them, saying that she could better find bodies for them. The leader of the Underearth Men agrees to this and allows her to leave.

Back on the surface, Venus tells Whitney what she experienced and they begin plotting a trap for the Underearth Men. Venus returns to them the following night and informs them that she has learned of a triple burial that is happening that will suit their purposes. Venus then leads them out to the grave yard, but when they get out they spot a flashlight and Venus instead leads them to a nearby cave. They hide out until sunrise and the Underearth Men begin to succumb to the sunlight and die. Their leader tries to flee back to their cavern but when he arrives he finds that the humans have covered it over and he too dies in the sun, ending their threats.

Appearing in "The Day that Venus Vanished"Edit

Synopsis for "The Day that Venus Vanished"Edit

At the offices of Beauty Magazine, Whitney Hammond asks Della Mason where Venus is and learns that she had gone to interview a photographer named Jerome Lenz and that she will be back at the office at four o'clock. While at the studio of Mr. Lenz, Venus meets with him and he tells her that he has invented a new camera and asks her if he can take her photograph. Venus agrees and when Lenz snaps her photo, Venus finds herself literally trapped in her photograph. Lenz then uses scissors to cut Venus out of the photo, leaving her in a miniaturized two dimensional form, but able to move and talk. He has decided to keep her and locks her into a box, but due to her thin form, Venus is able to slide out of a box and begins to plan to restore herself to normal.

Meanwhile, as four o'clock passes, Whitney Hammond becomes worried about Venus and decides to go and see what is keeping her. Arriving at Lenz's studio, Lenz tells Hammond that Venus left hours ago. However, Hammond realizes that Lenz is lying when he spots Venus' coat on the table. Deciding to try and find out what happened, Hammond pretends to be interested in the camera that is set up. Before Jerome can warn him to leave the camera alone and Hammond unintentionally takes a photo of him, trapping Jerome in a picture. Hammond is confused by the sudden disappearance of Lenz and discards the picture and leaves to get help.

Venus then agrees to cut out Lenz so that he can restore her to normal. When he tells Venus that they can be restored to normal if someone takes a picture of them again. Venus then traps Lenz but closing his head in the jewel box. Just then Whitney and Della arrive to investigate the camera some more. When they snap another picture, Venus jumps into the paths camera and it restores her to normal. Venus then tells them what happened and then tries to use the camera to restore Lenz to normal. When she does, Lenz disappears instead of turning it back to normal. Questioning the whole experience, Venus has no choice to believe it when Della turns up the photograph that she was cut out of.

Appearing in "Escape from Death"Edit

Synopsis for "Escape from Death"Edit

Appearing in "The Living Dolls"Edit

Synopsis for "The Living Dolls"Edit

Venus, Whitney Hammond and Beauty Magazine reporter Reggie Smith are at the circus and become interested in Professor Zorsky's Living Dolls performance which boasts to have real living dolls. They are shocked when Zorsky puts on his show with a large number of life like dolls. However when Reggie tries to take a picture of them, Zorsky becomes angry and orders them to leave, telling them that photographs are not allowed. Later that night at the offices of Beauty Magazine as Venus and Reggie are about to examine the photographs a man comes and takes the photos at gun point.

Realizing that there is something suspicious going on, Venus decides to investigate further. Disguising herself, she uses her beauty to convince the circus owner to have her become part of the Living Dolls act. Before the next show, Venus is caught trying to spy on Zorsky and one of his dolls and Zorsky puts her under a hypnotic spell. In the audience that night is Reggie who recognizes Venus as part of the performance and that something is wrong with her. He rushes to a phone and calls Whitney Hammond who comes rushing to the circus.

When Whitney tries to confront Zorsky he reaches for a gun. Reggie snaps a picture hoping the flash with distract Zorsky while he and Whitney are scrapping. The flash frees Venus from Zorsky's hypnotic control and she joins the struggle as well. Zorsky's gun goes off, fatally shooting Zorsky. In the aftermath, everything is explained to the authorities. Venus then tries to get to the bottom of the Living Dolls mystery convinced that they are intricate machines. Venus tries to open one of the dolls and is horrified when he finds that the dolls are filled with blood. Once home with Whitney and the horror over, Venus decides that the mystery will never be uncovered.

Retrieved from "https://heykidscomics.fandom.com/wiki/Venus_Vol_1_15?oldid=1466334"
Community content is available under CC-BY-SA unless otherwise noted.