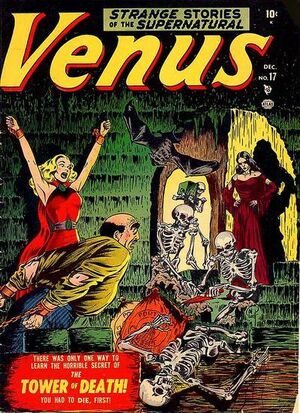 Appearing in "The Tower of Death!"Edit

Synopsis for "The Tower of Death!"Edit

At the English castle of Lord Etherington, thew owner of the property spots a light up in one of the towers, which is impossible. Suspecting that his property is haunted by the ghost of his daughter Cathy, Lord Etherington decides to enlist the aid of Venus. He flies to New York City where he arranges a meeting with Venus and tells her how he believes his home is haunted by the ghost of his daughter. Venus agrees to investigate and takes a plane with Etherington back to England.

On their way to the Etherington estate, he tells Venus that his daughter was from a previous marriage, after his wife had died he claims that his daughter Cathy fell into the river and apparently drowned some ten years earlier. Venus finds the story a little to fantastic to believe however that night at midnight she is awoken by sounds from downstairs and goes to investigate. Venus runs into Cathy Etherington, and is surprised when Cathy appears to be alive and well. Incredibly enough, Cathy thinks that Venus is a ghost until she is able to calm Cathy down. She learns that Cathy hates her father, because he had murdered her mother years ago. In order too prevent Cathy from telling the authorities, Lord Etherington knocked her out and put her in the upper tower of his castle and then hired workers to secretly seal the door shut with bricks, leaving Cathy to starve to death. Etherington then killed the workers and buried them down by the river and crafted the story about Cathy drowning in the river. Cathy then explains that she found a secret passageway in the tower that allowed her to sneak out and that she as spent the last ten years trying to convince her father that she is a ghost in order to drive him insane. Venus tells Cathy to go back to her room while she goes to investigate things.

Hours later, Venus goes out to the spot where the dead workers were buried and begins to dig up the graves. She is caught in the act by Lord Etherington, and both are shocked to find the graves to be empty. In a panic Etherington rushes back to his castle. Venus is held up in following when Cathy appears to gloat at her fathers fright and accompanies Venus back to the castle when they hear Lord Etherington screaming from the tower. They go up to the tower and find that the bricked up wall was torn down and then rebricked, trapping Etherington inside.

The pair use the secret passageway to get into the tower room to confront Lord Etherington. However, seeing his daughter in the flesh frightens Etherington so badly he dies of a heart attack. Venus and Cathy are left to wonder who trapped Etherington in the room. Later when the police are called in to investigate the crime scene both of the women are shocked when the bones of the two dead workers are found in the freshly dug up graves. Venus and Cathy are left to believe that it was the dead workers who came back to life to get revenge against Etherington for murdering them many years ago. With her father dead, Cathy accepts an invitation from Venus to return with her to America.

Appearing in "The Cartoonist's Calamity!"Edit

Synopsis for "The Cartoonist's Calamity!"Edit

At the offices of Beauty Magazine, cartoon editor Jimmy Rogers lashes out at his employees for now producing any work that he considers funny. His edgy behavior earns the concern of Venus who asks him if everything is all right. Jimmy angrily tells her to mind her own business, prompting Venus to go see Whitney Hammond and tell him her concern about Jimmy's erratic behavior. Whitney suggests that Venus go down to Jimmy's house and check up on him and see if everything is all right.

When Venus pays Jimmy's home a visit she is let in by a grotesque African American characature and finds Jimmy in torment by a group of strange demons, monsters and other apparitions. She goes to Jimmy and realizes that he has been tormented by these creatures for days now and that they will not let him die in peace. She is shocked when he shows her that these creatures are all from a comic book he had been drawing and that in creating them in his imagination he has somehow given them life. Venus suggests that Jimmy draw a hero to deal with the creatures, but he is so fatigued that he passes out before he can do anything. When Venus attempts to do the drawing herself, the creatures try to stop her, but she holds them back as Jimmy comes around and goes to his drawing bored. From there he begins to draw a hero who then comes to life and leaps out of his drawn and slays all the creatures.

With the monsters all slain, Jimmy draws the hero jumping back into his ink bottle and the hero vanishes as well. In the aftermath of the ordeal, Jimmy vows to never draw another horror comic again.

Appearing in "The Stone Man!"Edit

Synopsis for "The Stone Man!"Edit

It's a hot summer day in New York City as Venus and her lover Whitney Hammond are walking through the city streets when they're attention is drawn to a panic in Central Park. There they find what appears to be a massive stone statue of a fish-man standing in central park that nobody can explain as there is no evidence that the statue was put there by earthly means. This is not the only such statue as reports come in from all over the world that statues have appeared everywhere including London, Paris, Rio Deganiro and Russia. In Moscow, the Soviet government considers the appearance of the statue to be some kind of American trick. Like wise panic spreads around the world and other democratic countries come to believe that they are perhaps a Russian weapon of some kind as well.

That night, as Venus and Whitney continue their walk, Whitney suggests that they just forget the strange statues and then asks Venus to marry him. When Venus hesitates to give him an answer, Whitney becomes upset and storms off. Before Venus can follow after him she is shocked to find one of the statues rise out of the water -- and that it is a living, talking creature. The creature grabs Venus and explains that his is a race of Undersea Titans that have sent some of their people to the surface world to investigate but none have returned. As the creature demands that Venus tell him what happened the massive being suddenly turns solid and inert as a statue.

Venus frees herself and goes to Whitney's apartment to tell him what happened. The fantastic story is published in all the newspapers but the general public refuses to believe the claims. Venus then meets with government officials to explain what she knows about the creatures and it is decided that they should be blown up. However, the missiles used against the creatures have no effect. Then a sudden rain shower passes through and the water revives the creatures and they go on a rampage through New York City, causing massive damage. The air force is called in but their weapons have no effect. One of the creatures grabs Venus and informs her that the lack of water is what made them inert, and now that they have been attacked unprovoked they intend to conquer the surface world.

However, the rain begins to stop and the Undersea Titans then flee, diving into the ocean before they can dry up once again. They go with a terrifying warning: That they will be back some day to conquer the surface world.

Retrieved from "https://heykidscomics.fandom.com/wiki/Venus_Vol_1_17?oldid=1466338"
Community content is available under CC-BY-SA unless otherwise noted.