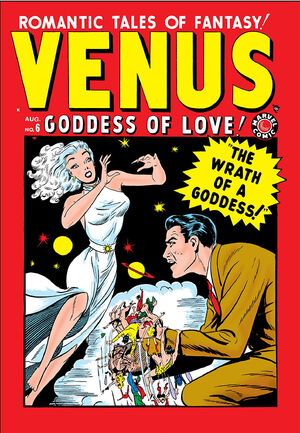 Appearing in "The Wrath of a Goddess!"Edit

Synopsis for "The Wrath of a Goddess!"Edit

Whitney Hammond calls Venus and Della Mason into his office to inform them that Beauty Magazine is entering a Mardi Gras float competition in New Orleans. Much to Della's annoyance, Hammond decides to have the float only feature Venus as the prime attraction, sure that it will be enough to win the competition for them. Della however warns Whitney from making such a rash decision, but he chooses to ignore it.

They all fly to New Orleans where Venus starts to get a feeling that things are not what they seem. She notices a dark cloud hovering over the city and vaguely recognizes strange party goers who appear to be dressed up like demons. Unable to shake her feelings of dread, Venus then tries to return to Olympus but finds that her powers are gone and that she is stranded on Earth. Fearful for what may happen, Venus seeks comfort from Whitney Hammond. The following morning the parade is on and Venus rides her float. However, she is horrified when a float appears behind her that appears to be that of Loki, ruler of Hades. Venus is shocked, especially when the float suddenly vanishes. Fearing that it might be the real Loki, somehow free from his eternal prison in Hades, Venus rushes off her float, disqualifying Beauty Magazine from the competition. She questions the judges on who registered the Loki float and learns that there was no such float registered in the competition. Venus realizes to her horror that Loki is loose on Earth.

When Whitney Hammond demands answers as to why Venus left their float, she cannot explain it to him disappointing Whitney greatly. Della takes the opportunity to lead Whitney away, leaving Venus to lament over the danger and the damage done to her relationship. As Venus is left to contemplate she realizes that since she cannot return to Olympus she will try to travel to Hades and stop Loki there. Her hunch proves correct and Venus is able to transport herself to the neither realm. There she is escorted by demons to Loki's throne room where Loki explains that he tricked Jupiter into allowing him to break free from his domain: By allowing Venus to remain on Earth unopposed, so too could Loki break his promise to Jupiter and reappear on the Earth as well. Loki then explains that Venus fell into his trap and has his demons tie her up. Loki then leaves Hades to spread his evil all over Earth, telling Venus that he will take possession of a mortal and ruin everything that she loves. Left alone in Hades, Venus uses her charm powers to convince the demons to let her free of her bonds, she then teleports back to Earth.

Back in New Orleans, Venus begins searching hopelessly for Loki but finds no trace of him. Running into Whitney and Della at a party, Venus tries to explain what is going on but Whitney does not believe her. Worse he has fired her as editor of Beauty Magazine and given Della the job. Hurt, Venus slinks away until she realizes that Whitney is not acting like himself and doubles back to try and talk sense into him. She returns just as Whitney has finished instructing Della to write up a telegraph offering to sell Beauty Magazine to his rival Arnold Simms. When Venus questions why Whitney would sell his magazine to a man who would turn it into a gaudy tabloid, Hammond tells her to mind her own business and once more rejects her. Venus then realizes that it is Whitney whom Loki has possessed. Using her charm powers she stops a hotel attendant from sending the telegram and destroys it.

Seeking aid, she calls on Apollo who teleports to Earth and tells Venus that he has no power over Loki but suggests that she appeal to Jupiter and that she will know Loki has been vanquished when the sun shines again. At that point, Della has realized that Whitney has been acting strange and is starting not to like it, but the Loki possessed Hammond also brushes this off. Meanwhile, Venus has formulated a plan and preys to Jupiter for aid. Venus then turns invisible and confronts Hammond and uses her charm powers to woo Loki out of his body, promising to return with him to Hades to be his queen forever. Loki takes this offer and leaves Hammond's body and the pair teleport away. Free from Loki's influence, Whitney realizes the errors he has made and tries to fix things.

Meanwhile, as Loki and Venus are on their way to Hades, Jupiter appears before them and stops their travels. Jupiter then reveals that this was all a test for Venus and he is glad to see that she was willing to sacrifice all that she loved in order to stop Loki. Having passed the test, Jupiter releases Venus from her bond to Loki and banishes him back to Hades and returns Venus to Earth. Venus reappears before Whitney and the two make up, as they kiss the dark cloud that loomed over New Orleans dissipates revealing the sun.

Retrieved from "https://heykidscomics.fandom.com/wiki/Venus_Vol_1_6?oldid=1718290"
Community content is available under CC-BY-SA unless otherwise noted.