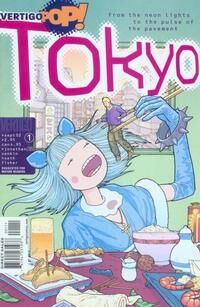 From the neon lights to the pulse of the pavement

Ryuji, thought by his fellow gangsters as a wimp, is sent on a mission that is perfect for him – because no one is suppose to be killed. Steve is an American who came to Tokyo to feed his appetite for new hi-tech gadgets. Mizumi, a young high-school girl, is planning to be a flight attendant. Maki, her friend, wants to be a pop star. The two girls go out to find Gaijin boys so they can practice their English. The young ladies stumble across Steve while he is being harassed by the police (for being Gaijin), and rescue him. After finishing his job, Ryuji and his associates protest against anti-gangster laws until he receives a new mission. Meanwhile, Steve and sixteen-year old Maki meet up at Nihon Budokan for a concert, and to practice English. They manage to get backstage so Maki can meet her Pop! Idol Hike, lead singer of the band One Six Seven, where they find Yakuza waiting to ambush Hike. Maki recognizes the gangster – it is her brother Ryuji

Retrieved from "https://heykidscomics.fandom.com/wiki/Vertigo_Pop!_Tokyo_Vol_1_1?oldid=1466038"
Community content is available under CC-BY-SA unless otherwise noted.