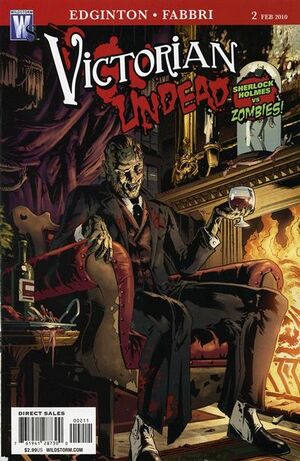 After all, that is the beauty of being able to call upon an army of the dead...I can always make more!

Appearing in "Part Two: The Skull Beneath The Skin"Edit

Synopsis for "Part Two: The Skull Beneath The Skin"Edit

Late at night, Sherlock Holmes is studying until detecting Dr. Watson's entry. Watson relates to Holmes of the revenant (the zombie) at Scotland Yard which he couldn't keep his mind off of it. Holmes, on the other hand, is concerned of the sudden appearance of government agents who are involved and threaten him from getting involved. Watson then suspects his friend of having themselves going to the underground construction tunnel where the dead workmen were, thanks to his own detective skills of Holmes' preparedness.

Holmes and Watson sneaks pass policemen on guard, and explores the underground. The two find where the workmen discovered the zombie and decided to dig through the disturbed earth where the zombie came from. Holmes and Watson break through and discover an entire buried London street stretching back to the past. Watson then discover a mass pile of human skeletons. Holmes closely examine that the skeletons are not ancient nor of any late period given their Victorian attire. Watson finds the corpse of a postman and find his post, discovering that the letters are dated barely a year ago. The doctor is suddenly grasp by a female zombie and is fortunately saved by Holmes, who decapitates it with a kukri knife.

Knowing that they are not alone, Holmes uses a flare gun revealing a approaching horde of zombies. With their exit trapped, Holmes and Watson shoot their pistols at the zombies (at the head as later suggested by Holmes) as they retreat up a fallen stone ramp. The two fights off the zombies as the flare begins to diminish. Unexpectedly, multiple flares are lighted and are sourced to a group of machine-gun armed and armored soldiers, who guns down the zombies surrounding Holmes and Watson. After some of the zombies are killed, the captain of the soldiers tells Holmes and Watson that they are to come with them. After Holmes and Watson are safely with the soldiers, the captain then orders the grenadiers to finish the remaining zombies with phosphorus and magnesium. Sherlock suspects that someone had "done this before" and greets his brother Mycroft Holmes, who came with the soldiers. Mycroft states that he is fortunate to intercept his brother and Watson from their near ghastly demise and decides it is time for more explanations for the detective and the doctor at the Diogenes Club as they come out to a military checkpoint.

As Holmes, Watson and Mycroft emerge out to the surface, a unknown man observed them from afar.

The unknown man returns to a building in Whitechapel, filling with preserved zombies within glass tubes. The man, revealing to be Colonel Sebastian Moran, alerts to his master that Holmes and Watson's discovery of their "cache" of undead. His master, however, is none too concerned as their plan is going accordingly. Also he points out that they know how to create a new reserve of undead, as the last panel reveals Moran's master to be a decrepit-and-decaying-looking Professor James Moriarty!

Retrieved from "https://heykidscomics.fandom.com/wiki/Victorian_Undead_Vol_1_2?oldid=1474672"
Community content is available under CC-BY-SA unless otherwise noted.