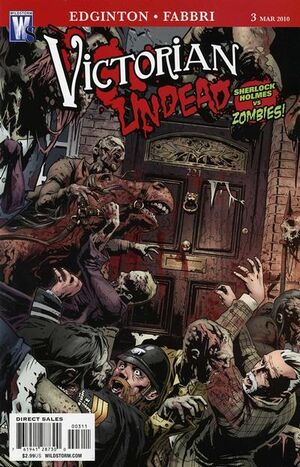 Those who died, rose and preyed upon the living, spreading the contagion with every bite. However, ignorance was the greatest enemy...

That morning at the Diogenes Club, Sherlock and Dr. Watson wants answers from Mycroft during breakfast over the revenants under the city and of the government's involvement. Mycroft admits that the death of the underground workmen alerted the government which was beyond his control when the agents warned Sherlock and Watson at Scotland Yard, and ask Dr. Watson if he is familiar of Doctor John Snow and Reverend Henry Whitehead. Watson, being a physician, brief his full knowledge of Doctor Snow for his pioneer in the field of epidemiology and germ theory, in which he was critical of the miasma theory - that disease was spread by foul air - and disproved it during the 1854 cholera outbreak, when he traced its origins to the Broad Street pump in Soho from being supplied with sewage water. And as for the Reverend Whitehead, he was important for his local knowledge in pinpointing the outbreaks and ultimately its source. As Watson summarize that the outbreak caused the deaths of six-hundred, Mycroft correct Watson that it was closer to fifteen-hundred. Mycroft explains what exactly happened in 1854.

During that time the dead came to life and preyed on the living, spreading the undead outbreak exponentially. The government and law enforcements were ignorant of what is happening, wrongly seeing it as a riot until undead policemen filled its ranks. Fortunately, the government was aided by Doctor Snow, who had encountered the undead firsthand, created a more effective tactic. The area of the infected was sealed off from the public under the guise of a public health matter, thus contained, and everything within was scoured and cleansed by more effective soldiers, who are even equipped in suits of armors and using medieval melee weaponry. In the aftermath, the cause of the outbreak remained unknown and all knowledge of the outbreak was covered up. Doctor Snow kept his silence with the assurance of a more extensive public works that is undertaken in improving public sanitation, and soon early died from a stroke. Presumably by the burden he had seen. Reverend Whitehead on the other hand kept a strong faith to his ripe age, believing that good triumphs over manifested evils. So far no further incidents of an undead outbreak ever happened in the last forty years.

Dr. Watson then speak of the letter he founded underground where the infected are which contradicts the last supposed outbreak, and wonders of the number of missing people and the source of the infection. Holmes theorize that someone is creating and corralling a legion of the undead given that if a infected had ever once escape anyone would've discover the other undead. Now the more pressing question remains is whether the zombies that were discovered underground are the sole cache, or there is maybe more.

At Whitechapel, Professor Moriarty have his cache of zombies timed and released from their corrals, and states his intention is to bring a decadent and arrogant Britain to its downfall through the dead.

Later, Holmes and Watson are walking back to 221 Baker Street. Holmes shares his thoughts to Watson that what they learned are still being repressed by their yet rigid and paranoid government, even from Mycroft. The two then witness a pedestrian being almost attack by a zombie. Suddenly more zombies appear on the scene.

Holmes and Watson runs back to Baker Street and find fresh blood on the doorway. The two are almost shot by a fearful gun-wielding Mrs. Hudson and hurried inside as the undead appears on the street. The two then learns from Mrs. Hudson that she saw a baker boy being attacked and devoured by the undead. Holmes then heads to his study and begin searching for a book on 1854. Watson enters and find Holmes what he was looking for, and reads out of a peculiar comet that happened six months before the Broad Street pump outbreak and connects the relationship between these events. Holmes then pulls out a book called The Dynamics of an Asteroid, and read out its author's theory of comets and meteors carrying microscopic lifeforms and responsible for seeding planets with life, suggesting that the comet in 1854 seeded the infection. Watson, however, is skeptical of the theory. But Holmes reveals to him that the theory was regarded by "the most renowned figures in his field", to be none other than written by Professor James Moriarty. Surprised, Watson tells Holmes that it couldn't be Moriarty responsible for the outbreak given that he was dead. Holmes points out that he himself was thought to be dead just as more zombies appear on Baker Street.