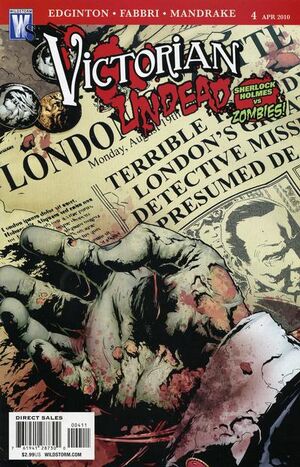 I am a reanimated corpse with a barely reined craving for human flesh--and only now you question my sanity?!

Appearing in "Part Four: And Death Shall Have No Dominion"Edit

Synopsis for "Part Four: And Death Shall Have No Dominion"Edit

In a flashback to 1891, Professor James Moriarty fell off Reichenbach Falls after grappling with Sherlock Holmes. Moriarty floats down the falls' river and is discover grievously and mortally injured by Colonel Sebastian Moran. Moran, as per ordered by his master, pull out a vial set and injected its content into Moriarty's heart. Moriarty reacted violently and rises up as a zombie. Just as Moran was about to shoot Moriarty, the Professor shows that he still has total control and sentience over his now undead body.

In the present, London is in complete turmoil as the undead battle the living. From Moriarty's hideout, Moran profess to his master that given the situation they can have the government to yield to him. But, Moriarty reveals that he doesn't want anything from what the government have for him. He elaborates that given his undead state, he doesn't have the normal cravings that humans want, except for his acquisition of power over the undead. So forth, he decides to instead turn London into his necropolis capital and rule an entire world fill with undead as he has the serum that was administered to him that could control the zombies. Moriarty then offers Moran the chance to be like him. Moran, finally seeing his master is insane, refuses to be turn into a zombie. He is then surrounded by Moriarty's zombies and Moran is bitten by Moriarty before making his escape.

At Baker Street; Sherlock Holmes, John Watson and Mrs. Hudson have been confined in their building for several days since the outbreak. Holmes has been trying to connect the relationships between the undead, the comet in 1854, and Moriarty while everyone in the household is almost on their last rations. Suddenly, a loud rumbling is felt which belongs to the appearance of a convoy of tanks and armored vehicles on the street, slaughtering the undead by rolling them over and shooting them with mounted machine guns. The captain of the convoy greets and notifies Holmes that his brother Mycroft had ordered the rescue for him and his friends, and are to be evacuated as soon as possible.

Just as everyone is about to evacuate, a very bitten and weaken Moran appears. He is then beset by more zombies. The soldiers fires on the zombies, but also wounding Moran in the crossfire. Holmes, Watson, and the captain rush over to Moran and finds that there is nothing to help him from turning into a zombie. As Moran lies dying, he regretfully tells Holmes of Moriarty as being the mastermind of the outbreak and as well of his undead condition. Moran then expires and is shot in the head by the captain. Now knowing that their nemesis is behind the outbreak, Holmes scrapes mud off of Moran's left shoe and tells Watson that "the game is afoot."

Retrieved from "https://heykidscomics.fandom.com/wiki/Victorian_Undead_Vol_1_4?oldid=1474674"
Community content is available under CC-BY-SA unless otherwise noted.