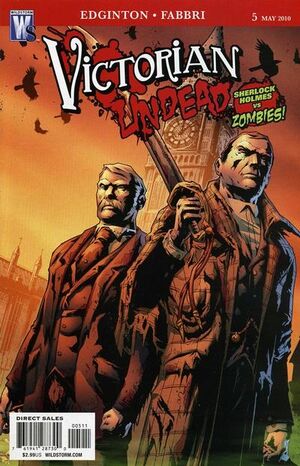 Appearing in "Part Five: The Earth Shall Give Up Its Dead"Edit

Synopsis for "Part Five: The Earth Shall Give Up Its Dead"Edit

Professor Moriarty has completely taken over a undead-infested London and takes his residence in Buckingham Palace.

Meanwhile, Sherlock Holmes and Doctor Watson are relocated to Windsor Castle, where it is being use as a command center by the British government. They are granted an audience to the command room and meet Lord Bellinger, the Prime Minister. Lord Bellinger knows from Mycroft about his brother's leads on Moriarty's machination of the undead and wants to know from Sherlock about the mad professor. Holmes replies that all he knows about Moriarty is that he is a complete vile madman who shows no mercy or remorse. Sherlock in turn question Lord Bellinger what is happening right now; in which Bellinger answers that the state of London is being lose to the undead and suspects that they are being led. Also, Bellinger reveals that since the first zombie outbreak forty years ago, Britain had anticipated another outbreak only because after previously discovering foreign agents attempting to steal the undead remains for their respective nations, whom they had heard of the previous outbreak, and to cultivate the undead virus as a weapon. As of now Moriarty holds the ultimate and deadly biological weapon in the world. Holmes then implores from the Secretary of State Trelawney Hope about the current undead expansion in London, which he tells it is growing exponentially as containment is thinning out. Upon hearing this, Holmes strongly suggest the option of using incendiary weapons in wiping out the undead block by block at the cost of burning London to the ground. Everyone is shocked by his suggestion, but Holmes states that it is the only choice in destroying the undead from gaining hold of Britain and spreading their contagion to the world.

At London's Westminster Bridge, the undead had breached through the defense perimeter after allowing their numbers to slip through by walking under the Thames River.

That night, Holmes and Watson are approach by Mycroft, who informs them that the Prime Minister had authorize his brother's plan in having warships to bombard London in response to the undead that breached Westminster Bridge. But Sherlock is aghast to learn that the government intends to let Moriarty be burn along with London rather than having him dealt with directly. However, Mycroft already expects his brother's determination and provides him a launch into London to face Moriarty. But Watson then admits to Sherlock that he refuses to go with him as he is too frighten from what he had witnessed. Though Holmes understands, but at the last second Watson goes with him as the last time he thought he lost Sherlock alone when he faced Moriarty. While on the way to the launch, Sherlock implore his brother of why Trelawney Hope became tasked in tactical deployments. Mycroft explains to him that it is a part of a contingency plan should London was gripped in an uprising, which Hope succeeds his predecessors of the Home Secretary and his staffs, who were devoured by the undead. Mycroft then question his brother of how he will find Moriarty. Sherlock simply replies of retracing Colonel Moran's footsteps, which leads to Whitechapel.

Holmes and Watson travel by motor boat, as Holmes deduced from the clay soil found on Moran's footwear, which traces to Whitechapel. Also, the soil possess traces of animal blood, leaving Moriarty's whereabouts in Whitechapel's only dockside slaughter house. The two enter the building and indeed find traces of Moriarty's presence, and as well peculiarly finding decapitated skulls. Suddenly, Moriarty appears before Sherlock and Watson, but not in his undead state.

Retrieved from "https://heykidscomics.fandom.com/wiki/Victorian_Undead_Vol_1_5?oldid=1474675"
Community content is available under CC-BY-SA unless otherwise noted.