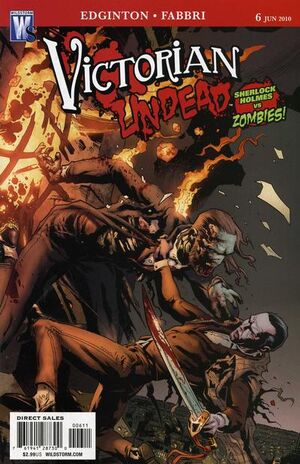 Confronted by a apparently alive Moriarty, Sherlock Holmes reveals that "Moriarty" is an android construct being controlled and talk through by the real Moriarty. He tells that this is not the first time they met Moriarty as Moriarty was the controller of the original automaton that he and Watson had previously encountered, which is why it was familiar with Holmes. Furthermore, Moriarty's use of the android was allowed to fooled Trelawney Hope in luring him with his quench for vices and the use of mesmerism to gain access to his contingency plans, allowing the zombies to easily overrun London. Explaining earlier on that both Holmes and Watson were called by Trelawney to investigate the missing documents after he unwittingly realized that they were missing. The two are then beset by Moriarty's zombies and manage to escape right after Holmes partially destroys the robot Moriarty's face.

Sherlock and Watson heads for the underground subway tunnels to find Moriarty, which Holmes deduce from Moriarty's words to be in Buckingham Palace before the British Navy scorch London. They then manage to enter into the secret line under the Palace and discover its royal station. Holmes recites to Watson that they know their plan in dealing with Moriarty before having himself alone to confront his nemesis.

At the same time, the countdown for London's scorch earth policy is finalize as the warships at the Thames River begins firing on the city. Moriarty observes this from the Palace's balcony as Holmes confronts him. Moriarty states to the detective that he can create more zombies despite London's inferno and, learning from their previous encounters and determine that his plans succeeds, renege their chivalry and shoots Holmes with a pistol, wounding him in the shoulder. Sherlock takes cover and, sharing the same intentions as his nemesis, throws a live grenade at Moriarty which blows up the entire room. However, a scalded Moriarty appears out of the flames and strangles Sherlock. Just as Moriarty boasts to Holmes that Watson isn't here to save him like in Reichenbach Falls, Sherlock correctly points out that he is inside the Palace: Sherlock had predetermined in having Watson heading to the Palace's top floor, where he shoots a signal flare in gaining the attention of a airship co-commandeered by Mycroft Holmes which its crew prepares to bomb Buckingham Palace.

Sherlock breaks free of Moriarty's grasp and subduing in Baritsu before finally decapitating him with his Kukri knife. Watson rush to where Holmes is, who ask the doctor to find Moriarty's still functioning head. But Watson tells Sherlock that it is too late as Mycroft's airship is positioning over to bomb the Palace. They are forced to safely escape Buckingham Palace as it is then destroy by aerial bombardment.

In a closing narration by Watson, London is burned to the ground in the "Second Great Fire" by a combined fleet of warships and airships which eradicated the undead, and the Thames itself was also scourged meticulously for any remaining zombies. In spite of thousands of lives killed and the city in smoking ruins, London, and like its people, endured and begins its reconstruction. At a new home gifted to Holmes by the government, Watson shows his finished draft to Sherlock of their recent adventure. Holmes is impress but notes that the story cannot be publish as they obligingly swear to sign the "Official Secrets Act", as the entire zombie outbreak is covered up again, much to Watson's disappointment. But Holmes encourage Watson to file his latest story for posterity and suggesting that it might prove something more in the future.

As London rebuilds, beneath the city the undead head of Moriarty survives by being attach to his own automaton and is seen experimenting zombified heads.

Retrieved from "https://heykidscomics.fandom.com/wiki/Victorian_Undead_Vol_1_6?oldid=1474676"
Community content is available under CC-BY-SA unless otherwise noted.