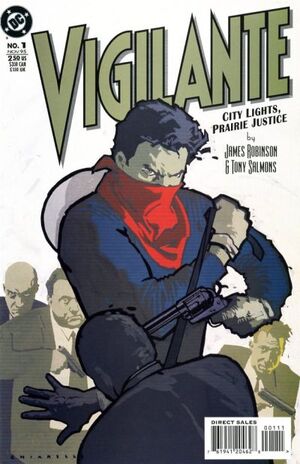 Appearing in "City Lights, Prairie Justice Part I of IV"Edit

Synopsis for "City Lights, Prairie Justice Part I of IV"Edit

A night in 1942 in the Nevada desert outside of Las Vegas. Benjamin "Bugsy" Siegel and three of his crew are driving and discussing business ventures when Bugsy orders the driver to stop the car. All the men get out of the car and Bugsy realizes his dream: to create a casino/resort here in the middle of the desert.

November 1944 Club Blanco Los Angeles. Mickey Cohen and another of Bugsy's cohorts are drinking and discussing why Bugsy has decided at the last moment not to join them when Vigilante drives through the main window, firing his guns and demanding that Bugsy show himself.

Two weeks earlier, in Hollywood, Greg Saunders is shooting a western movie scene and flubs a line. The director calls for a break and Greg walks to his trailer with Monty, his agent. Greg admits to being uncomfortable trying to become an actor after so many years as a singer, but Monty assures him he'll be a success. Greg enters his trailer and is soon joined by sidekick Danny Leong a.k.a. Stuff. Danny tells Greg he is in love with a wannabee actress, Stacey, and brings her in to meet Greg. She reveals that Danny has told her that Greg can arrange a screen test for her much to Greg's dismay.

Later, in the Coconut Grove lounge, Gary Cooper shows Greg around town stopping at a restaurant where they spot Bugsy Siegel. Gary offers to introduce Greg to him but Greg refuses to associate with people like him.

Back home, Greg wonders into his dictaphone why he agreed to come to Los Angeles with its mob connections and corrupt police. He had promised himself he'd hang up the costume and give acting a chance but he feels the urge to try to clean up the town. A woman named Loretta, whom he met earlier this evening, asks to come over and Greg realizes he is in a town where good intentions can quickly become idle thoughts.

Later, Greg is filming another scene. Afterwards a frantic Danny comes running up explaining that Stacey has vanished, that Danny hasn't seen or heard from her for two days. When Greg suggests that she may be avoiding him, Danny reveals that they're engaged. Greg agrees to look for her providing Danny stay out of it as he's too emotionally distraught to be of help.

That night Vigilante searches Stacey's home and finds her address book and nude photos of Stacey. He goes to the home of Sammy, a man listed in Stacey's address book who specializes in nude photographs, and strong arms him into revealing that Stacey needed more money than nude photographs were paying. Sammy directed her to another man who could pay more if she was willing to go beyond posing.

Back at Greg's Residence, Greg tries to calm Danny down after having told him what he'd learned so far. Danny cares only for Stacey's return but admits his hatred for Bugsy. Greg promises to keep searching for Stacey and leaves for Tijuana, Mexico. There he finds Pedro Romhanyi in a hotel. He admits Stacey is nearby and, as they leave, Vigilante is ambushed by at least a dozen Mexican police officers. Pedro states that he was warned of Vigilante's plans to come and has arranged a trap. Vigilante manages to drag Pedro to safety but Pedro has been fatally shot. He admits that the women weren't for a film but for slavery. Stacey tried to escape but was shot and killed by one of Pedro's men. Vigilante shoots his way to freedom.

Stopping at a pay phone in San Diego on his way back, he finds out from Monty, who is waiting in Greg's home, that Stuff is dead. Back in Los Angeles, Vigilante learns from one of Bugsy's henchmen, whom Vigilante has just beat up, that Stuff barged into Bugsy's office. Bugsy's men held him while Bugsy beat him to death with a crowbar. The henchmen told Vigilante that Bugsy was at Club Blanco...returning the narrative to the beginning.

Learning that Bugsy isn't present, Vigilante tells his henchment to tell Bugsy that he's after him.

Retrieved from "https://heykidscomics.fandom.com/wiki/Vigilante:_City_Lights,_Prairie_Justice_Vol_1_1?oldid=1714772"
Community content is available under CC-BY-SA unless otherwise noted.