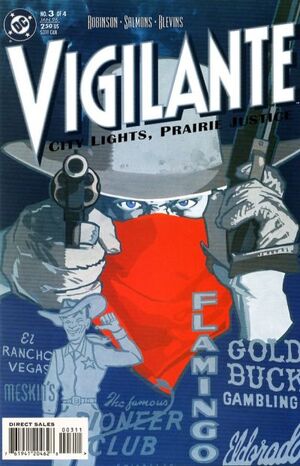 June 12, 1946: Benjamin "Bugsy" Seigel meets with his partners and asks for another million dollars to make sure the Flamingo Hotel is open on time. He tries to sell the idea that this would be steady, legal and respectable income. They have already given him three million and are not happy about the request. Bugsy tells Moe that the plan is to open on December 26th and that George Raft has promised him a multitide of stars that will attract the gambling masses. Bugsy is immediately set upon by contractors who need more money.

That night, the Vigilante watches the blinking Flamingo sign from his new desert home. He returns to his dictaphone diary explaining he's been out of action this past year while his body and mind recuperated. He has not forgotten his vendetta with Bugsy but he's encountered problems. He spoke to the Vegas Sheriff and learned that, although the Sheriff wasn't happy with Bugsy's plans, they weren't illegal. The only wrong may potentially be done is by one of Bugsy's goons, Jack "Masher" Heshie, who's wife, Marla, is having an affair with a local rancher, Tom Daniels. So far, Vigilante doesn't think Hessie knows but, if and when he learns, he may do something illegal that could bring Bugsy into it. So Vigilante has no choice but to watch and wait. While he does so, Vigilante tries to break in a mustang to see if he's got his nerve back.

Time passes. Bugsy's contractors continue to need more and more money. Heshie confronts his wife about rumors he's heard about her and Tom Daniels. Since he doesn't know for certain, he chooses not to act but does not hide his intentions to torture and kill Daniels. Virginia Hill confronts Bugsy over her belief that he's sleeping with singer Wendy Barrie which he denies, though he is. Later, Virgina and Bugsy argue over he lack of decorating the hotel which turns into an argument about costs. They are interrupted by a contractor also seeking more money. Bugsy flies back to Los Angeles and returns two days later with a suitcase of cash.

In Havanna, Cuba Lucky Luciano and Meyer Lansky discuss Bugsy's costly hotel as well as their belief that he's skimmed two million dollars for himself. They decide to wait: if the casino is a success, they'll take it back from the profits; if it fails, they'll kill him.

Meanwhile, Heshie has left for two days of business and his wife goes to Tom's house for an hour or two of lovemaking. Vigilante watches Daniels' home from afar.

Later, George Raft, in a phone conversation, promises Bugsy that thirty famous guests have been confirmed for opening night. The conversation is interrupted by a brawl between Virginia and Wendy. Virginia leaves Bugsy that same night. Again, Vigilante is watching from afar.

Meyer confronts Bugsy about the missing two million dollars and he's deduced it was Virginia who skimmed it. Bugsy defends her saying it was he who borrowed it to pay off a personal debt. That night, however, Bugsy calls Virginia and confronts her on it.

December 26, 1946 comes and the casino is open. Only barely anyone has shown. Bugsy confronts George Raft who admits the big stars started cancelling and he was afraid to tell Bugsy. Opening night is a bust. Vigilante reflects on how Bugsy's lack of success has done part of the job he wanted to do on Bugsy.

Tom and Mabel make love again at Daniel's and discuss a possible future together when Heshie and his men arrive and pull them both out of Tom's trailer. Heshie tells them he lied about his travel plans hoping to catch them in the act. He pulls a switchblade on them but Vigilante, riding his now broken mustang rides through them. Heshie and his men climb in their cars and chase after Vigilante who manages to drive them off a cliff.

Meanwhile, Bugsy's financiers decide that Bugsy has to die over the casino's failure.

Retrieved from "https://heykidscomics.fandom.com/wiki/Vigilante:_City_Lights,_Prairie_Justice_Vol_1_3?oldid=1466227"
Community content is available under CC-BY-SA unless otherwise noted.