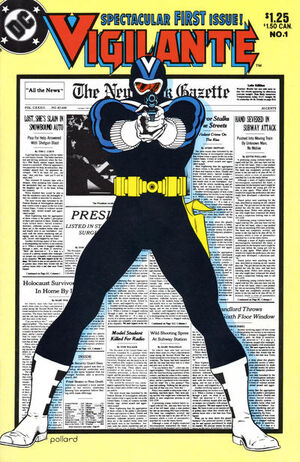 We can't continue to let those who are innocent suffer while the guilty get away without punishment. While trying to be fair, while hoping to be merciful, we've forfeited fairness and mercy. In the name of Justice, we've cheerfully sold off the right of the honest man to live off the fruits of his honest work. So Stay here and Work here, because if you flee, if everyone runs, then you've surrendered your life, your happiness, and your freedom to the criminal element. In effect, you've allowed them to win. And it's time for the little man to win.

Appearing in "A Fable for Our Times!"Edit

Synopsis for "A Fable for Our Times!"Edit

Vigilante is given the chance to take down one of his oldest enemies, evil businessman Mister Quilt, a thoroughly disgusting human being. As D.A. of New York City, Adrian had unsuccesfully prosecuted Quilt four times. While Quilt is being investigated by the government, he sends his private thug Brand to collect papers from Eppie Reynolds, an old mistress who has been blackmailing him. Brand ends up killing her husband. The Vigilante is intensely, albeit ill-informedly put on the case. He runs a one-man assault on Quilt's compound, and bypasses all of Quilt's men, but at the entrance he's defeated in single-combat by Brand. Quilt has Brand let him live, lectures the Vigilante in his twisted ethics over a game of racketball, and informs him of Eppie's blackmailing. Adrian finds Eppie at her father's house, and it is revealed that she had been blackmailing Quilt not for money, but for custody of their child. Shortly afterwards, Brand assaults them through the window, and drives off in his car. The Vigilante chases him to Coney Island, where they end up battling again, this time on top of the Cyclone. The second time around, Chase is able to defeat Brand, and throws him off of the roller coaster to his death. Later, after patching him up, Eppie tells Adrian that she plans on leaving the state to a place Quilt will never be able to find them. Adrian tells her that this is exactly why he began fighting crime. When the Vigilante next confronts Quilt, he tells him he's through. Quilt laughs in his face, because he owns all of the judges in the town, and pulls a gun on the Vigilante. Before he can even pull the trigger, the Vigilante draws his pistol and shoots Quilt dead, then calmly walks out the door.

Retrieved from "https://heykidscomics.fandom.com/wiki/Vigilante_Vol_1_1?oldid=1466087"
Community content is available under CC-BY-SA unless otherwise noted.