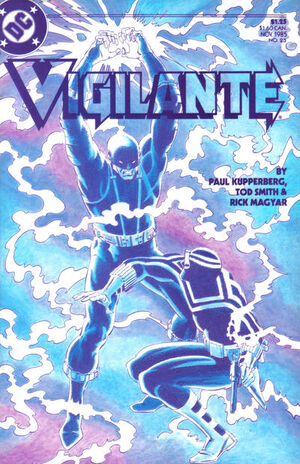 You've made a mockery of the very system that makes this country great, McDade.

Appearing in "...Many Unhappy Returns!"Edit

Synopsis for "...Many Unhappy Returns!"Edit

Judge Adrian Chase presides over the trial of drug dealer Trinidad Santiago. Defense attorney Charles McDade provides evidence that the arresting officers failed to provide a proper warrant and also failed to successfully make Santiago aware of his rights. Though he despises what he must do, Chase has little choice but to dismiss the case.

Meanwhile, the Electrocutioner returns to Manhattan. He encounters two muggers in Central Park and attacks them with lethal doses of electricity from his gauntlets.

Marcia King, unable to cope with Adrian's obsessive lifestyle, seeks council from her therapist. Without revealing Adrian's name, she tells Doctor Knopf that she has intimate knowledge of the Vigilante's actions.

The Vigilante meanwhile, continues to cut a bloody swathe of bodies in the name of justice. He breaks into Charles McDade's limousine and shoots he and his lady friend Mona Simpson to death.

That evening, Adrian Chase learns that the Electrocutioner is back in town as well as the continued actions of the Vigilante.

Retrieved from "https://heykidscomics.fandom.com/wiki/Vigilante_Vol_1_23?oldid=1466131"
Community content is available under CC-BY-SA unless otherwise noted.