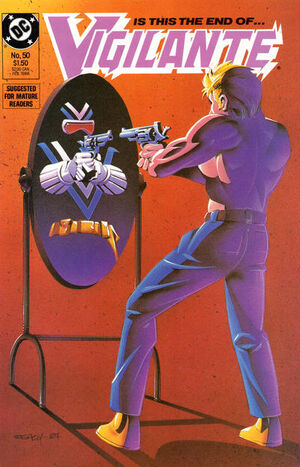 It's funny. Somewhere, I knew I wasn't going to live out this night. God knows I was giving Death every opportunity... but the body wouldn't cooperate with the mind. The organism wanted to live. What the Hell did it know?

Adrian Chase reminisces about all of the things that have brought him to this moment. He gets into an argument with Black Thorn in his apartment and backhands her across the face.

He goes out and takes in a movie to clear his head. During the show, a group of rowdy teenagers irritates him and he attacks them. Police raid the theater during the fight, but Adrian fights them off and escapes custody.

Black Thorn meets with Harry Stein in a diner to discuss Adrian's declining mental health. Harry has no idea where Chase is, and tells Thorn to calm down.

Adrian dons his Vigilante disguise and raids an opium den. The police track his movements and raid the house seconds after the Vigilante slaughters everyone in the room. Captain Hall gives chase and gets the drop on Chase. Surprised, Adrian instinctively fires upon Captain Hall, and accidentally kills him.

Burdened by the weight of his own sins, Adrian Chase can no longer endure the guilt of the lives he has taken. Alone and despondent, he returns to his apartment, loads his magnum and takes his own life.

Retrieved from "https://heykidscomics.fandom.com/wiki/Vigilante_Vol_1_50?oldid=1466185"
Community content is available under CC-BY-SA unless otherwise noted.