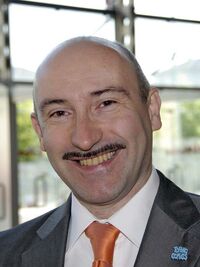 His career starts in 1977 with the weekly magazine Il nostro tempo in which he drew caricatures. The following year he created, along with Alberto Setzu, the character Lockness. With Gianfranco Goria and a group of fans he founded in 1994 the Anonima fumetti association which promotes young creators.

In the meantime he collaborated with publishers Paravia, Elledici and Edizioni Paoline. In 1983 with Mario Checchia he set up the cooperative Ettigraffio which works in the advertising and graphics field.

He worked as an illustrator for companies such as Ferrero, Mattel Toys and Fischer Price doing character studies and storyboards.

In 1988 he founded Studio 901 Cartoons Production which produced comics and graphics. Starting 1983 he worked on Dolly (Arnoldo Mondadori Editore), and from 1989 to 1993 for Corriere dei Piccoli. From 1998 to 2000 he collaborated on the Dodo series (Giorgio Mondadori Editore).

Since 1994 he has organized the annual comics convention Torino Comics of which he is the co-founder and creative director. In 2004 Vittorio Pavesio Productions established its own division in France, Pavesio Editions.

Retrieved from "https://heykidscomics.fandom.com/wiki/Vittorio_Pavesio?oldid=196144"
Community content is available under CC-BY-SA unless otherwise noted.