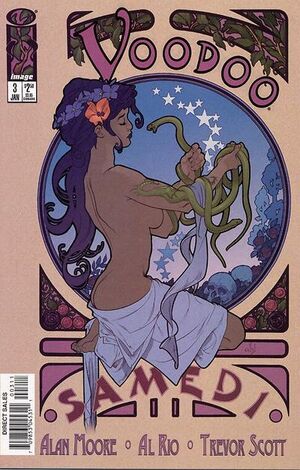 Look, Voodoo is just my stage name. It doesn't mean anything.

As Voodoo walks back to the Royale Hotel, her friend Purity catches up to her, concerned after Voodoo seemed to have a fit on-stage. Purity was impressed with Voodoo's dancing, but Voodoo has no memory of anything that happened after she stepped onto the stage. When they arrive at the Royale, the reason for Purity's earlier confusion at its mention becomes apparent when they find that all that stands in its place are the building's remains, having burnt down years ago.

Voodoo is extremely confused, as she had breakfast there just that morning, and had spent the night there with four other eccentric people. Sympathetically, Purity invites Voodoo to spend the night with her at the boarding house, but Voodoo can only lie awake in bed.

That night, Lieutenant Dave Dove dreams that he is in the middle of an angry mob, preparing to break into St. Benedict's church, which stood where the Midnight Lounge now stands, more than forty years ago. The townspeople believe that the reverend of the church has been involved in sexual rituals with their wives, and that one of them, Liddy Charles is eight months pregnant. They finally burst through the door to find that the church has been filled with voodoo iconography, and a naked Ida Graham has been driven nearly insane by her experience. Incensed by this discovery, the townspeople rush off to the hotel where Reverend LaCroix has taken Liddy Charles. Angrily, they burn the Royale Hotel to the ground with LaCroix still inside.

Dave Dove wakes in a sweat to the sound of his phone ringing, notifying him of his partner's death. At Frank Chaney's place, Dove is not prepared for the horror of seeing Frank's mangled body. Reilly, the investigating officer, suggests that before Dove starts imagining things, he should take it easy.

Dove decides to go to the boarding house where Angel Connors was staying. When he knocks on Purity's door, Voodoo answers. She explains that Purity isn't there, and was gone when she woke up, while the lieutenant invites himself in. Inside, Dove finds Voodoos books on voodoo magic, and comments that he's not as sure as he once was that it isn't real.

Voodoo admits that since she came to New Orleans she has felt like there was something going on beneath the surface of things that she couldn't penetrate. She is still shaken from the night before, when she was possessed in the middle of her act, and fell into a strange trance. Dove comments that he's not surprised, given the Midnight Lounge's history, and the church that once stood in its place. Absently, he mentions that he dreamed of that church at the very moment that his partner was killed, and likely the same moment that Voodoo had her fit. Thinking her a sympathetic person, Dove invites Voodoo to go for a drive with him, and she agrees.

Meanwhile, Purity notices that the photo in the dressing room of the old church has changed again. This time, Reverend LaCroix seems to be closer, and larger in the frame. Christian Charles interrupts her and remarks that the change is part of his method of celebrating his birthday. In fact, the club is closed for the day, and he's expecting family for his party.

In the car, Voodoo realizes that Dove has taken her once again to the ruins of the Royale Hotel. Suspicious, she accuses him of having taken her there as part of a plan to mess with her head and drive her crazy. Lt. Dove is surprised that she even knows of the place, and Voodoo complains that just the day before there had been a hotel standing there with residents.

Dove explains that he took her there because he had dreamed of that place. The hotel was connected to what happened at the church. When the church authorities closed the church in 1949, Jean-Pierre LaCroix had holed up inside the Royale. The reason LaCroix had had his church shut down was that in addition to having some kind of sex thing going on with his parishioners, he was preaching voodoo.

On the Midnight Lounge's stage, Purity is surprised to see some of the other changes Charles has made. The stage has been adorned with voodoo charms, scrawled in what appears to be blood. She notes the similarity to those charms she saw in Angel's room at the boarding house, and Christian Charles comments that Angel's protective charms were hopeless, suggesting his complicity in her murder. Purity doesn't pick up on it, but asks to know what she's there for.

Charles admits that he has no intention of opening the club today, given that it's his birthday, but remarks that she must stay because she will be the life blood of his party. He has her taken into the back room of the club, where Christy's body still hangs in the cage.

Lt. Dove explains how after the church was closed in '49, LaCroix kept using it for voodoo rituals well into 1950, and on today's date, a mob stormed the church and found a voodoo altar and a hysterical woman. LaCroix, however, had already escaped to the Royale where he was with another woman who was giving birth to his baby. That woman was Lydia Charles; Christian Charles' mother. Voodoo realizes suddenly that the murdered dancers were human sacrifices, and Purity is in danger.

Purity realizes immediately what's going on when she sees Christy's body. Christian Charles begins removing his clothes and preparing to have her killed, and her blood drained out onto him. Rather than allow that to happen, purity takes a metal comb from her boot and stabs Fisko in the throat with it, running from the room. Rather than go after her, Charles decides to use Fisko instead, and has Claude drag his companion into the cage for draining.

Soon, Voodoo and Lt. Dove make their way to the Midnight Lounge, where they are suddenly surprised by Purity, who attempts to defend herself with a broken bottle, before realizing that they're her friends. Meanwhile, as Claude skewers Fisko over and over, the glass covering the photo of the church has broken, and LaCroix is missing from the photo. The ground begins to shake, and outside, Attibon comments to Baron Samedi that they were too late to stop the return of LaCroix. The church begins to grow up out of the ground in place of the club. Now the future is in the hands of God.

Retrieved from "https://heykidscomics.fandom.com/wiki/Voodoo_(DC)_Vol_1_3?oldid=766914"
Community content is available under CC-BY-SA unless otherwise noted.