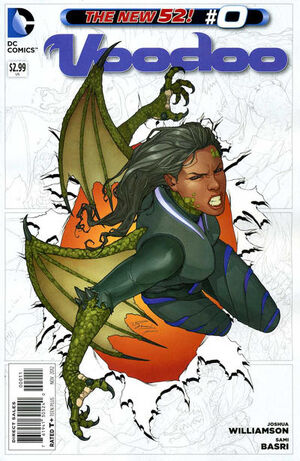 Earth will never be yours!

Priscilla Kitaen had always had trouble accepting that she was special. Even when she woke in a vat, connected to life-support systems, just one specimen among numerous others, it was hard to accept. As she forced its lid open, and detached herself from the wires and tubes, she overheard the words of horrifying creatures speaking of how they had been using these captive humans for tests - something about a prophecy and slavery. Sure that it was a dream, she thought back, and remembered how she had been abducted in the park, and experimented on. This was real.

Desperately, Priscilla snuck away, avoiding the aliens, and listening for more information about their attempts to create hybrid sleeper agents, meant to infiltrate Earth's super-human population. She became convinced that she needed to escape, and warn the Earth of the impending invasion. Unfortunately, she ran afoul of two of the aliens, and was forced to run. As she did, she spotted a cage full of humans who begged her for help, but she could do nothing for them but promise to come back for them.

The pause was a mistake, though, and she was caught. In her desperation to escape, Priscilla lashed out, and realized that she had developed some kind of ability. She grew wings and claws, and freed herself. However, her thoughts were not entirely her own. She could feel the impulse to kill all humans encroaching on her own thoughts. The aliens realized that they had succeeded. Priscilla was their successful hybrid, and the prophecy would come true. Ignoring them, she crashed through a window, and found herself falling from the spaceship to the earth below.

Fortunately, her new wings held her aloft, but the aliens gave chase as well. She was saved, though, by the Black Razors, who had been dispatched to deal with the alien threat. Unfortunately, after stopping the aliens, they captured Priscilla as well, given that she had somehow been affected by the aliens. They knocked her unconscious and called back to their leader, Andrew Lincoln to report. Razors Jessica Fallon and Tyler Evans hoped they would get a promotion for this.

With their first successful hybrid lost to them, the aliens decided that they would simply clone her, but this time, they would train her first. She would become a devout of their faith, and believe in the prophecy. When the clone woke, she was greeted with fanfare, and given a cover identity as an exotic dancer.

Now, Priscilla has been through a lot, and she is intent on stopping the Deamonite invasion. Cole Cash has a similar goal, and the two decide to join forces.

Retrieved from "https://heykidscomics.fandom.com/wiki/Voodoo_Vol_2_0?oldid=1473451"
Community content is available under CC-BY-SA unless otherwise noted.