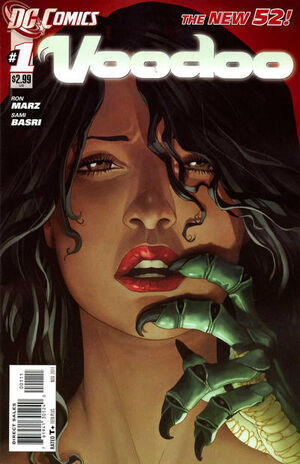 It's a good place to learn about people. Men, especially. They have their defenses down here.

Voodoo is an exotic dancer at the Voodoo club. By tradition, the most popular dancer at the club gets to be the club's namesake. Her popularity is evident by the shower of bills that follows after every move she makes.
In this case, her performance is being watched by Agents Tyler Evans and Jessica Fallon. Fallon, being a woman, has an obvious distaste for their location and their assignment, but Evans is quite enthusiastic. Grumpily, Fallon decides to leave.
Voodoo singles Evans out, and one of the other girls serving drinks comments that it is unusual for her to do so. Evans presses the girl for information about the dancer, and manages to find out that her name is Priscilla.
Outside, a group of teen thugs tries to get into the club with fake IDs, and the bouncer turns them aside. On her way out, Fallon pushes the thugs aside and continues on her way. The thugs take it as a personal offence, and gang up on her. When they press her about it, she unleashes brutal attacks on them, leaving them groaning on the street. Finished, she lights a cigarette.
In the dressing room, the girls make idle chat. One of the girls - Abby - is upset that her sitter has cancelled, and there's nobody to watch her son Cody. None of the girls are able to help, and Abby turns to Priscilla. Awkwardly, she tries to explain that she is not well-suited to babysitting. Another of the girls warns that if she wants to last there, she should help out a bit more, because the girls are like a family. The girls' chatter is interrupted when it is announced that Voodoo has been hired for a private dance.
She enters the back room to find Evans waiting for her. He offers her cash for a dance, and she begins removing her clothes. He begins asking personal questions, and she tries to brush them off. Eventually, though, she relents, revealing that her real name is Priscilla Kitaen, her mother is dead and her father was never around. As a mixed race woman, she didn't fit in well. After moving to New Orleans, she took up exotic dancing because it made more money than waitressing.
Evans claims that her story is a lie, offering an alternative. She is a shape-changing alien sent to spy on earth's heroes, specifically to eliminate anyone who might prevent an invasion. It's likely that she has telepathic abilities, as well.
From her hotel room, Jess Fallon tries to contact Evans, but only gets his voicemail. She apologizes for unprofessionally leaving in the middle of an investigation. She warns him not to do anything stupid.
Evans states that he's offering Voodoo a chance to turn herself in before he has her captured and then has experiments done on her. Voodoo uses her telepathy to see what horrors he has planned for her, and in disgust, she transforms into her alien self, and murders Agent Evans.
After getting dressed, she tells the club owner that she quits. She shifts her appearance into that of Agent Evans, and then returns Fallon's call.

Retrieved from "https://heykidscomics.fandom.com/wiki/Voodoo_Vol_2_1?oldid=1473453"
Community content is available under CC-BY-SA unless otherwise noted.