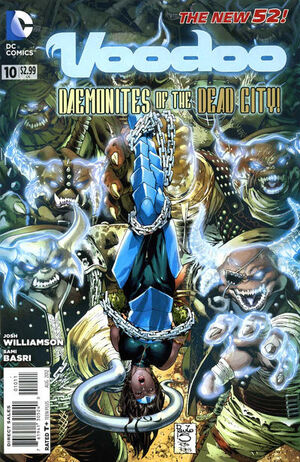 Don't even start, you two. This "broad" us our only lead in bringing Voodoo to justice, so stow it.

Voodoo has arrived on Europa, the 6th moon of Jupiter, where a group of local life has already begun fighting over the remains of her ship. She supposes that they are an offshoot of the Daemonites, but unlike any she has yet encountered. Voodoo has come in service of Helspont, searching for the Dead City. However, the Daemonite hive-mind holds no information about it, and she worries that it may be something truly terrible. She has little time to think on it before she is caught in the chains of her hosts, who intend to eat her.

Meanwhile, Priscilla Kitaen struggles to navigate a Daemonite ship in pursuit of Voodoo, along with a retinue of Black Razors headed by Andrew Lincoln. The Black Razors are annoyed to be working with someone who was only just their prisoner - especially to have to rely on her to steer the ship.

They begin to fight between themselves, and their ruckus threatens to break Priscilla's concentration. Eventually, Magnus tosses Axel Walker into Priscilla, and she is knocked to the ground, severing her connection to the ship, and causing them to spin out of control. It is only moments before they crash that Priscilla comes to, and orders the ship to land - perhaps too late.

On Europa, Voodoo slips free of her chains using her shape-shifting ability, just as her captors' leader Mol Stone arrives. After a brief tussle, Voodoo manages to explain that she is doing the work of Helspont. The assembled Daemonites realize that their master is still alive, and loyally agree to lead Voodoo to the gates of the city where the Blue Flame is kept.

Priscilla and the Black Razors step out of the wreckage of their ship to find that they are surrounded by the moon's many savage inhabitants. Priscilla is too weak from flying the ship to continue, and the Razors will have to deal with these creatures and find Voodoo the old-fashioned way.

Mol Stone leads Voodoo to a gate guarded by two massive stone statues. He explains that they are forbidden to enter the city and access the Blue Flame. When she asks why, he demonstrates by having two of his men attempt to enter the gate. The statues suddenly spring to life and tear the men in half, before returning to their original places. Mol Stone points out that they would certainly have taken the Blue Flame by now, if it were as easy as that.

Cursing Helspont's deception, Voodoo prepares to face the statues, and gain access to the Blue Flame.

Retrieved from "https://heykidscomics.fandom.com/wiki/Voodoo_Vol_2_10?oldid=1473473"
Community content is available under CC-BY-SA unless otherwise noted.