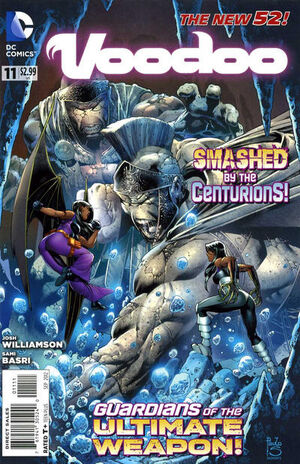 Obsession is a... funny thing. Especially when you know you're going past the point of no return. Being here now I have to question my own actions and obsessions.

In her quest to acquire the Blue Flame, Voodoo has come under attack by two giant robots called Centurions, while the assembled Daemonite population jeers and roots for her death. She does an admirable job of dodging their grabs until she senses Priscilla Kitaen on the surface of Europa, and fails to notice a Centurion wrapping its fingers around her until too late.

Meanwhile, Priscilla and her accompanying Black Razors have crashed their stolen Daemonite ship, and once Pris has recovered from the strain, she and Axel Walker II chase after Voodoo while Lincoln and Skvarla seek out other crashed ships to salvage parts from.

The Daemonites continue to mock Voodoo until she begins to lead the Centurions toward them. The robots kill without discrimination, allowing her the opportunity to enter the cave they guarded uninterrupted.

Lincoln and Skvarla manage to find the parts they need, and return to the ship in time to see Flynn and Magnus torn to shreds by the Daemonites.

Priscilla and Axel, meanwhile, are surprised by the Daemonites' leader Mol Stone, who mistakes them for emissaries of Helspont, sent to help Voodoo with her mission. He agrees to help them, and tells them that Voodoo escaped into the caves. Before dying from his wounds, he warns that the Blue Flame was never meant to be found.

As Voodoo discovers the location of the Blue Flame - a weapon with which she could kill the super-human population of earth - Priscilla confronts her, and they prepare to fight.

Retrieved from "https://heykidscomics.fandom.com/wiki/Voodoo_Vol_2_11?oldid=1473475"
Community content is available under CC-BY-SA unless otherwise noted.