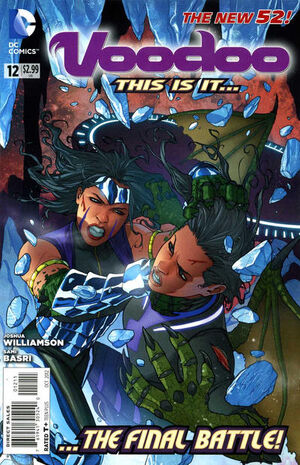 Our connection was broken. Hopefully she understands now that she doesn't have to be like this. There is still hope for her.

Appearing in "You Can Never Go Home Again"Edit

Synopsis for "You Can Never Go Home Again"Edit

Even after Voodoo stole her identity and then aligned herself with pure evil, even after she herself was kidnapped by the Black Razors, Priscilla Kitaen only wants to save her clone, now. Revenge is no longer her motivation. Still, she is forced to fight for the fate of the earth for the weapon known as the Blue Flame, which the Daemonite Helspont desires in order to kill all super-humans on the planet.

While Pris and Voodoo fight, Andrew Lincoln and Skvarla struggle to get their stolen Daemonite ship working again before they can be killed by the attacking Daemonite residents of Europa. Wanting to get away as soon as possible, Lincoln orders Axel Walker II to grab both Voodoo and Priscilla and get them back to the ship as soon as possible. This will prove difficult, as both women are locked in bitter battle.

Suddenly, though, they make a mental connection that sends them into another, non-physical plane of existence. They are connected to the Daemonite hivemind. This connection between the two of them is one of the new abilities foretold in the Daemonite prophecy. The same prophecy declares that for the Daemonites to evolve, they must first die. There are those who believe that the Daemonites must survive rather than evolve, and others who believe that hybrids like Voodoo and Priscilla are the key to a safe transition. Unfortunately, Helspont believes that the earth must be wiped of its human inhabitants in order to become the new home for the next generation of Daemonites. Priscilla explains that there is still a chance for Voodoo to break from the Daemonites' beliefs, and live for her own fate.

Unfortunately, their connection is severed suddenly. Priscilla offers Voodoo a hand getting up, hoping that their conversation in the hivemind will have changed her mind. The clone accuses her of lying, and instead grabs the Blue Flame with intent to kill her rival. Suddenly, Mol Stone, still alive, though close to dying, knocks her to the ground. With his last act being saving Priscilla, he dies. Quickly, Pris grabs the Blue Flame and she and Axel rush back to the cave's entrance, hoping they can get by the Centurions. Barely keeping ahead of the massive robots, they make it into their stolen ship, and Pris gets them into the air. As they fly away, Priscilla comments that the connection she felt to Voodoo has been severed.

Back on earth, Lincoln takes Priscilla back to her home, but she realizes that there is no place for her there. Lincoln suggests that she join the Black Razors, but she has other plans - something to do with a Grifter.

Unknown to Priscilla, Lincoln passes the Blue Flame off to a third party, in the hopes that it will not fall into the wrong hands.

Meanwhile, Voodoo has assumed leadership over the Daemonites living on Europa. She calls for revenge against Helspont, the Daemonite lords, and Priscilla.

Retrieved from "https://heykidscomics.fandom.com/wiki/Voodoo_Vol_2_12?oldid=1473477"
Community content is available under CC-BY-SA unless otherwise noted.