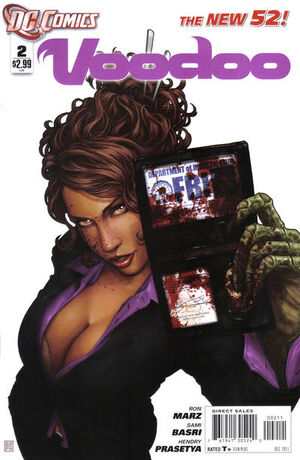 I'm only trying to complete my mission... and protect my people... Just like you are.

After having assumed the shape of federal agent Tyler Evans, Voodoo returns to the hotel across the street from the place that she murdered him, and decides to sleep with his partner, Agent Jessica Fallon in order to gain information from her.
Fallon is anxious about what would happen if she and her partner were caught having a sexual relationship, but Voodoo reassures and distracts her, buying time to get more information from her head, telepathically. Fallon's phone rings, but Voodoo, as Evans, encourages her to let it ring a while. She asks the agent how much longer it will be before the order is given to capture Voodoo. Fallon responds that the teams are all ready, but they're delaying in order to trace her contacts. Fallon comments that the only real way that anyone will learn anything from Voodoo is to carve her up. Having seen inside Evans' head, Voodoo knows all too well what the government's plans for her are.
As Evans, Voodoo excuses herself to use the bathroom, but once the door is closed, she has transformed into her human identity, Priscilla Kitaen. Though she could have killed Agent Fallon, it would gain her nothing. Knowing what she needs to know for now, she decides to escape through the window, and leave Fallon waiting. Meanwhile, Fallon decides to finally answer her phone, and is informed that Tyler Fallon - the man she believed she had been sleeping with moments ago - was brutally murdered less than an hour ago. Hurriedly, she storms into the bathroom with her gun at the ready, but it is already empty.
Fallon rendezvous with Chief Hurley of the local police, and examines her former partner's body. The Chief explains that Voodoo is going by the name Priscilla Kitaen, but he doesn't know if it's real or not. Meanwhile, the strike team has been assembled to stop her from leaving town.
Voodoo heads down a side-street, knowing that she has to leave soon. A man accosts her, and tries to give her a rough time, but he is suddenly shot in the shoulder with a tranquilizer round, which is soon followed by another into Voodoo's own. Running forward, she finds herself surrounded by a strike team called the Black Razors. The tranquilizer seems to have no effect, and Voodoo transforms into her true, alien form, attacking her attackers. Back at the strip club, Agent Fallon gets notification of Voodoo's whereabouts, loads her gun, and pursues.
With their hands full, the Black Razors call on help from codename: Black Jack. He drops down, sending shockwaves through the ground, and sends blasts of black energy at Voodoo, forcing her to dodge into an abandoned building. As he prepares to go in after her, Fallon, addressing him as "Bolton" commands him to stand down, as she outranks him in field operations. She offers the safe word "Ripley" should Voodoo steal her identity, and then walks in through the front door.
Fallon shouts out that despite orders to capture Voodoo alive, she now intends to kill her on sight for what she did to Evans, and for deceiving her into having sex with her. Voodoo leaps out and tackles Fallon to the floor, forcing her to drop her gun. With the agent in a headlock, she explains that she is only trying to complete her mission, to protect her people. In response, Fallon slams Voodoo's head into a mirror, and quickly grabs her gun.
From outside, the Black Razors hear several shots, and Fallon stumbles out, coughing the safe word "Ripley." She states that Voodoo is dead, ordering the Razors to collect the body. However, just as Fallon is out of sight, she emerges again moments later. Voodoo had used telepathy to find out the safe word in advance, and now she has escaped.
Somewhere in a diner, Voodoo stops for a cup of coffee, admitting to the waitress that she has had to learn to take care of herself this far from home, but she has a few tricks up her sleeve. Elsewhere, Green Lantern Kyle Rayner appears to be on Voodoo's trail as well.

Retrieved from "https://heykidscomics.fandom.com/wiki/Voodoo_Vol_2_2?oldid=1473455"
Community content is available under CC-BY-SA unless otherwise noted.