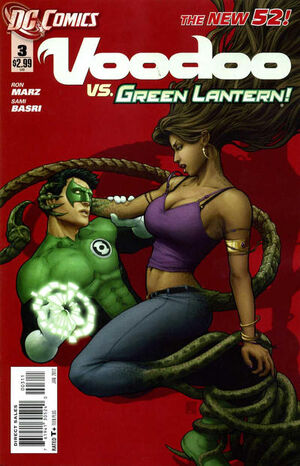 You're just saying that to be funny, right? Since I'm the guy with the power ring... and you're basically a supermodel with a crowbar.

Appearing in "Into the Light"Edit

Synopsis for "Into the Light"Edit

Voodoo hitchhikes her way to Alabama, but the she has little luck finding any drivers who will stop for her, rather than simply ogling her for her looks. Eventually a trucker stops for her, and agrees to take her to Alabama. When he gets a little too forward, she kills him, and walks the rest of the way.
Voodoo meets with a large man named Skinny at his gas station in Alabama. Skinny is apparently one of Voodoo's alien shape-shifter compatriots. She admits that her identity was compromised, but that nobody had followed her there. She reports that the humans know more about them than they thought. The humans suspect an invasion, but they don't yet know who they are. They know she is there to monitor Earth's heroes, and they know what she can do.
They hear a sudden noise, and are sent scrambling when the wall is blast away by a green steam engine - an energy construct from the Green Lantern Ring of Kyle Rayner. Kyle announces that he has tracked them there, following the deep space signals being sent from there, which were picked up on by the Guardians of the Universe on Oa.
Skinny and his cronies are hostile, transforming and attacking without hesitation, and Kyle is forced to restrain them. He is surprised when he feels a crowbar cracking down on his head. Turning, he is confused by Voodoo's actions, still believing her to be a human. She complains that humans are violent and war like - disgusted with their plans to capture and study her. To her puzzlement, Kyle gives her the benefit of the doubt, and asks to hear her story.
Before she can speak up, Skinny and the others recover and attack. Skinny orders Voodoo to escape, while he gets into an escape pod and shoots up into space. Kyle is forced to choose between following the mysterious, beautiful girl or chasing after the aliens. He chooses the aliens, which allows Voodoo to escape and continue her mission. Meanwhile, Kyle loses the aliens when they pass through a wormhole.
Later, in a diner that Voodoo had stopped in days before, an man demands to know where Voodoo is. A waitress admits that she saw Voodoo there before, and then the man kills her along with everyone else there. He appears to be of a similar race to Voodoo.

Retrieved from "https://heykidscomics.fandom.com/wiki/Voodoo_Vol_2_3?oldid=1511980"
Community content is available under CC-BY-SA unless otherwise noted.