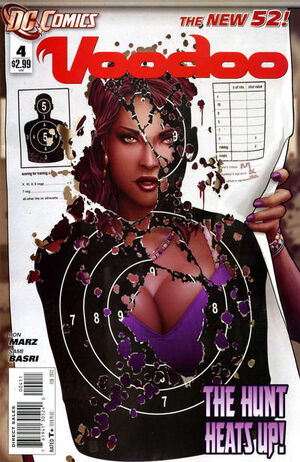 Some species can actually secrete toxins through their skin. Even their lips. Interesting, isn't it?

Voodoo breaks into a government installation where a hacker named Lloyd is being used to collect data on Earth's heroes. In that same facility, Agent Jessica Fallon, Chief Hurley, and a special operative known as Black Jack research the possibilities about Voodoo's origins. Records show that at the age of four, her mother died in a fire, and after that, there is little other information on her before Priscilla Kitaen returned as a shape-shifting alien stripper.
Assuming the identity of a guard, Voodoo steals a key card and slips into Lloyd's office. Attempting to seduce him, she reads his mind before planting a kiss on his lips, transferring toxins through her skin, and killing him. She accesses his computer, and discovers information about Superman and the rest of the Justice League.
Though they have lost track of Voodoo's movements, Agent Fallon is determined to catch her, feeling personally slighted by the way that the shape-shifter manipulated her emotions. She is determined to catch her on her own, without the help of Black Jack's task force, the Black Razors.
When Voodoo attempts to escape the office, she sets off alarms, and Fallon realizes that her prey is in the building. In the crowd of evacuees, Fallon spots Voodoo posing as her, and chases after, but she loses her around a corner. As it happens, Voodoo outsmarted her by shifting into a dog, and crawling under a fence to escape.
Elsewhere in Alabama, at the ruins of Skinny's garage, the strange blonde man who has been tracking Voodoo seeks information about her from a boy searching the wreckage. When the boy describes the colour and make of Skinny's car, the man kills him and heads off on his way.

Retrieved from "https://heykidscomics.fandom.com/wiki/Voodoo_Vol_2_4?oldid=1473460"
Community content is available under CC-BY-SA unless otherwise noted.