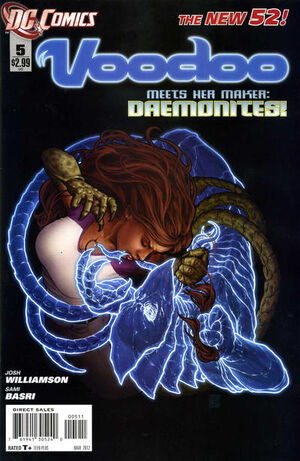 Coming here is dangerous. But if I have any hope of getting my signal out without the Green Lanterns intercepting it - this is the way it has to be done.

Somewhere at a top-secret archaeological dig in the American Midwest, Voodoo kills the guards and makes her way inside. Fortunately, despite the significance of the discovery, mankind is so greedy and distrustful that what was found hasn't been reported yet.

At the underground dig-site lies a remains of a crashed Daemonite battleship - the same one that brought her to Earth with all the other Daemonite Hybrids. Having made her way back to it, she can finally use the ships technology to transmit her findings on Earth's heroes to her superiors and complete her mission.

She is surprised to find a man waiting for her there. She attempts to distract him with her body while she tries to read his mind, but it fails because he has been trained to block her kind. She realizes that he is actually a Daemonite, and he readily admits that he plans to kill her. As a full Daemonite, he has developed a hatred for Daemonite-human hybrids like Voodoo. He considers her an abomination, and the pair of them begin to let their true forms emerge as they prepare for battle.

Elsewhere, at an undisclosed military base, Agent Jessica Fallon begins gathering her things together, having essentially lost her job as an FBI liaison with the Black Razors since Voodoo destroyed all the information they had on the aliens. Fallon was placed on indefinite leave because she seems to let her anger cloud her judgment. In reality, it was her feelings for her partner - the man who Voodoo killed - that got to her.

Black Jack appears in her makeshift office, mourning the loss Fallon as one of the best Black Razors and her decision to call it quits. Grumpily, she comments that he had let Voodoo slip by him as well. Realizing that she is right, he destroys her box of belongings and complains that they should both be making an effort to catch Voodoo regardless of what has happened to their jobs. Still, Fallon believes that all info on the aliens was destroyed until she has a sudden revelation. They might have one last chance to find Voodoo.

Back on the ship, Voodoo tries to defend her heritage as a hybrid by explaining that the Daemonites need to evolve to survive. Her assailant disagrees, claiming that the prophecy by which the council justifies the existence of hybrids was misread. He removes the last vestiges of his disguise and attacks her in his true body. Unfortunately, Voodoo is outmatched. She has never used her hybrid powers to this extent before, and she needs to find an advantage. Desperately, she makes a second attempt to get inside his mind.

The experience is far more intense than she expects, filled with visions of fear, feelings of being trapped, life, death, love, and escape. She didn't merely read her assailant's mind; she entered it. Knowing that the Daemonite fears Grifter, she shapeshifts into his form, but it is one shift too many, and the pain causes her to crumple. The assassin taunts her, claiming that her exposure to humans has tempered her Daemonite instincts to kill mercilessly. In letting Agent Fallon go, she exposed a vulnerability. she knows that he is right, and deciding to fill live up to that expectation, she mercilessly chomps off his head, killing him.

With her attacker out of the way, Voodoo attempts to complete her mission, inputting her stolen data into the ship's computer. As she uploads information about Earth's heroes, she notices a file on herself, and can't resist knowing what the government has found out about her.

Meanwhile, Agent Fallon leads Black Jack deep into a secure military base whose purpose is so top-secret that only the highest ranking officials know about it. She explains that the prisoner inside has been scheduled for execution, but if they can get to her first, they may be able to find a way to kill Voodoo.

As Agent Fallon opens a secure door to the holding cell, Voodoo comes to a surprising discovery. She is a clone. The government caught the real Voodoo months ago.

Retrieved from "https://heykidscomics.fandom.com/wiki/Voodoo_Vol_2_5?oldid=1473463"
Community content is available under CC-BY-SA unless otherwise noted.