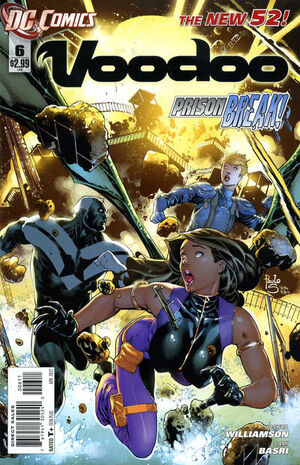 There is no way the Black Razors are going to let us release an alien experiment back into the field, just to try and catch another alien terrorist.

Appearing in "Smash and Grab"Edit

Synopsis for "Smash and Grab"Edit

On the Daemonite ship that was once buried underground, but is now hovering in the earth's orbit, Voodoo doesn't know what to feel about the revelation that she is actually a clone of the real Priscilla Kitaen, and that the Daemonite War Council had lied to her. With seconds before the ship self-destructs, Voodoo decides against sending the information she found to her superiors, and leaps through a transporter that will take her to the waiting War Council's ship.
Meanwhile, at a secret Black Razor base, Agent Jessica Fallon and Black Jack prepare to infiltrate it and rescue the real Priscilla Kitaen before she is moved to a new facility. Black Jack goes in the front door, blasting through it with his black energy beams and easily deflecting the Black Razors' blasts, despite their confusion at his apparent heel-face turn.
On the Daemonite ship, Voodoo disguises herself as Kyle Rayner, hoping to sneak past Skinny and his girlfriends. Skinny sees through the disguise immediately, and she lets it go, pressing past him. He demands to know whether she has completed her mission, and when she explains that she requested an audience with the War Council, he realizes that she has not. He laughs, and tiring of his voice, Voodoo slits his throat. Having already looked into their minds, she knows what they fear. She takes the form of the creature known as the Black Curate, and they bow before her in horror. After questioning them about whether they knew of her mission and what she really is, she allows them to go free, perhaps in error.
Back at the Black Razor Prison, Dr. d;fhsdlf has the Razors begin to move Priscilla Kitaen to a safer location, given the danger of her clone's arrival. Priscilla is confused as to why she was kept captive, despite having been saved from the Daemonites. She is clearly suspicious of the doctor as he prepares to inject her with something under the guise of protecting her. Suddenly, Agent Fallon and Black Jack burst through the door and release Priscilla from her shackles. Weakened from her captivity, Priscilla sprouts wings, and the three of them fly out of the lab.
Elsewhere, Andrew Lincoln receives a call from the Black Razors, and after hearing what Black Jack and Agent Fallon have done, he instructs them to merely observe and report, knowing that as good agents, they must have a reason to have broken Priscilla out of prison.
Meanwhile, Voodoo makes her way to the War Council's chambers, but she is stopped by the pure Daemonites outside. They attack her, and she is forced to transform and kill each of them. Inside the chamber, the War Council discusses the Daemonites' recent failures. The fallen one has been freed from StormWatch's imprisonment, Carver's ship has been destroyed and he has been killed, and the Black Curate was not properly summoned. Now, they need someone new to lead them into battle against the Earth's heroes.
The speaker is interrupted when Voodoo breaks through amid a pile of Daemonite corpses, and demands answers.

Retrieved from "https://heykidscomics.fandom.com/wiki/Voodoo_Vol_2_6?oldid=1473465"
Community content is available under CC-BY-SA unless otherwise noted.