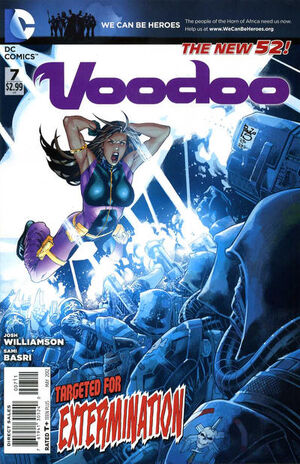 Then let's get going. I'm not waiting around until it's convenient for me, when lives could be in danger. Unlike some people.

At the Daemonite War Council, Voodoo demands to know whether it is true that she is a clone of a human. Rather than allow her to kill more of their kind, the Daemonites decide to tell her the truth. Of all the beings in the universe, only humans have the ability to manipulate themselves into becoming super-humans. In order to capitalize on this, the Daemonites did experiments with human cloning in order to create human-Daemonite hybrids. Voodoo is their most successful. Unfortunately, they did not expect her to rebel. Now, she must be reprogrammed, as they cannot make new clones. Voodoo broke the mould, as it were.

After making it to his safe house, Black Jack contacts Andrew Lincoln of the Blackhawk Squadron. Though Lincoln is confused as to why his two best Black Razor agents have rebelled and kidnapped a prisoner, he trusts them enough to see where it's going. He informs Jack that a Daemonite ship exploded nearby, and they may be able to get there before the Black Razors do.

Voodoo is attacked by the failed clones the Daemonites made after her. Fortunately, she manages to use her powers to kill all of them. Then, she turns her attentions to the other clones being kept in tanks, smashing them open and killing the inhabitants. The Daemonite accompanying her shouts that her insubordination is a waste of her potential, and offers her a new position and mission. Because she still believes in the prophecy, and the Daemonites' cause, Voodoo cannot refuse the opportunity to become commander of all of the hybrids on Earth.

At the site of the ship explosion, Priscilla is drawn into the crater by her telepathic connection to the emotions of her clone. Suddenly, Voodoo appears. She is surprised to see Priscilla there, because she was expected to be under some human's knife by now. Priscilla has no idea what the Daemonites are, and she has trouble understanding Voodoo's explanation that she was merely the template upon which Voodoo was based. Black Jack thrusts Priscilla aside, and decides to blast Voodoo, despite Agent Fallon's warnings. Voodoo doesn't hesitate, and rips the man's head from his body. She has taken the position that was offered to her, and now all that stands between her and her new mission are Fallon and the real Priscilla Kitaen.

Retrieved from "https://heykidscomics.fandom.com/wiki/Voodoo_Vol_2_7?oldid=1473467"
Community content is available under CC-BY-SA unless otherwise noted.