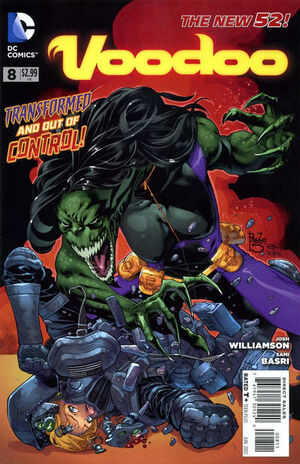 Maybe Fallon was right. There is so much I could learn from you. About what's real and what isn't in my past. There's so much I don't know. Why did the Daemonites choose you?

Appearing in "My Sister's Keeper"Edit

Synopsis for "My Sister's Keeper"Edit

Priscilla Kitaen feels her vision blurring as she watches her own hybrid clone, Voodoo rip the head from the shoulders of Black Jack, and threaten to do the same to she and her rescuer, Agent Jessica Fallon.

Fallon hopes that she can force Voodoo to surrender by taking hostage something that the Daemonite-Human hybrid wants: Priscilla. Voodoo dares Fallon to kill Priscilla, claiming not to care about her, but Fallon knows that her human counterpart is essential to finding out the truth about who she really is.

Meanwhile, at the edge of the crater above, members of the Black Razors notice that Black Jack is dead, and call back to headquarters for new orders. At the Black Razor compound, Andrew Lincoln is investigating the ruins of his facility in the wake of Priscilla Kitaen's escape, until he gets the call that Black Jack has been killed. Immediately, Lincoln gives the order for all Black Razors to assemble, and be ready for a fight.

Priscilla is not particularly comfortable with Fallon's plan, failing to understand why the woman who rescued her would now be putting a gun to her head. She also fails to notice when Fallon surreptitiously slips a device into her pocket, and whispers that she should play along. So, Priscilla headbutts her ostensible captor, and leaps up to the top of the crater leaving Fallon and Voodoo to face each other alone.

Voodoo taunts Fallon with the relationship she once had with her partner, Tyler Evans. She shifts her form into that of Evans, and reminds Fallon of how she was tricked into having sex with the shape-shifter. Voodoo claims that while Fallon loved Evans, he did not love her. All the while, Voodoo gets closer and closer to Fallon until finally, she thrusts her claw through the woman's gut.

Meanwhile, Priscilla has since realized what Fallon was trying to do, and returns in time to see Fallon fall. Voodoo claims that she is too fast to be hit, and Priscilla is too slow to save Fallon's life. However, Priscilla manages to place the device on Voodoo's chest, and it sends a powerful shock through her body.

As she rises, Voodoo takes on Priscilla's appearance, and claims that Priscilla is afraid that their resemblance is more than just in terms of appearance. Even despite her desire to kill Priscilla, Voodoo does indeed want to learn about her past from the human. She wants to know why Priscilla was chosen by the Daemonites, and not someone else. She believes that the coldness she feels in her heart comes from Priscilla, not the Daemonites. She offers Priscilla the chance to join her, and find the answers.

Suddenly, the Black Razors appear on the scene, and Andrew Lincoln orders that they capture both women, hoping that which is Voodoo will be revealed in the process. The Razors only manage to capture Priscilla, as Voodoo is too fast, and Lincoln orders them to go after the hybrid. Unfortunately, Voodoo's abilities allow her to evade the Razors completely.

Finally, Lincoln steps out in front of Priscilla and explains that he has no intention of arresting her. Instead, he wants her to come to work for him.

Retrieved from "https://heykidscomics.fandom.com/wiki/Voodoo_Vol_2_8?oldid=1473469"
Community content is available under CC-BY-SA unless otherwise noted.