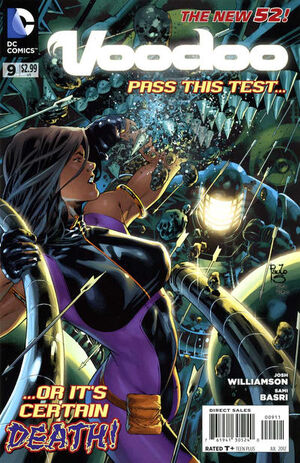 Trust me. The pain is practically unbearable, but I can feel her in that ship. She is heading to the weapon that alien with the blue-fire-for-a-head wanted.

Appearing in "It's a twin thing"Edit

Synopsis for "It's a twin thing"Edit

Priscilla Kitaen is plagued by nightmares of her clone, Voodoo. Since being rescued from the Black Razors' facility by Jessica Fallon, Priscilla has been training with Andrew Lincoln to join the same Black Razors that kidnapped her. Since joining, though, Andrew's interest in pursuing the dangerous clone seems to have faded.

Voodoo, meanwhile, has decided that in order to help see that the prophecy of the Daemonites is fulfilled, she must seek out the Daemonite who has developed his powers the most: Helspont. She finds him in South America. Helspont, though, seems to think that Voodoo's actions have weakened her destiny in the prophecy. Thinking he may give her a chance, he tells the story of the Dead City of the Daemonites.

On Jupiter's moon Europa, the Daemonites had established a checkpoint. Sometime after Helspont's imprisonment, a temple was discovered there, hiding a deadly weapon protected by such a force that all vital personnel were evacuated. The weapon was left behind forever. This weapon, Helspont believes, can be used to turn the Daemonites' greatest obstacle to terrestrial domination into their greatest weapon. Voodoo volunteers to get the weapon for him.

Meanwhile, Priscilla's training isn't meeting Lincoln's standards. He thinks she will need to use her powers in training, or she will never be ready. Axel Walker, though, is impressed - at least to the extent that he thinks she will improve once she's sparring with him instead of robots. He introduces himself, mentioning that he actually encountered her clone earlier. When Priscilla is informed that her clone posed as an exotic dancer, she is infuriated.

As Helspont prepares a salvaged Daemonite ship for Voodoo, he hints that the Dead City is inhabited, despite having claimed that it was evacuated. Before she can protest, Helspont sends the ship to its destination with Voodoo inside.

Priscilla is less inclined to try to use her powers to attack another human than a robot, but she is prevented from even trying by a powerful vision of Voodoo's discussion with Helspont. Hearing the details of the conversation, Lincoln realizes that Priscilla needs to be briefed about something.

He shows her to a Daemonite ship, which the Blackhawk Program had collected. Unfortunately, they had never figured out how to turn it on, so it could never be used. When Priscilla steps inside, however, it activates immediately. She can feel it trying to make her take control of it. Axel notices that the monitor screens are already tracking Voodoo's ship as it makes its way into space. Lincoln refuses to allow Priscilla to go after Voodoo at this early stage - whether the ship responds to her or not. However, Pris manages to convince him after some hard talk.

Lincoln assembles a space recon team - the best of the Black Razors. They gather within the ship, and Priscilla attempts to command the ship to its destination. Within seconds, they are zooming out into the atmosphere.

Retrieved from "https://heykidscomics.fandom.com/wiki/Voodoo_Vol_2_9?oldid=1473471"
Community content is available under CC-BY-SA unless otherwise noted.