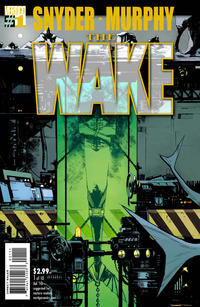 Enough bullshit, all right? You tell each of us we're here for something different, you drag us to the bottom of the ocean to some illegal oil rig. Just tell us the goddamn truth. What the hell are we doing down he--

Appearing in "The Wake Part One"Edit

Synopsis for "The Wake Part One"Edit

Dr. Lee Archer is a cetologist in Gig Harbour, Washington, separated from her son Parker for long periods at a time, thanks to an event in her past that forced her to give up custody and cost her the job she held with the NOAA. One day, her work is interrupted by the arrival of a helicopter carrying Agent Astor Cruz of the DHS. He has come to ask her about a particularly unusual sound which he believes might be some kind of whale song that was recorded in Alaska recently. When he plays it for her, a flash of recognition appears in her eyes, but she claims never to have heard it before. Cruz doesn't believe her, and offers that if she will come with him to Alaska to investigate this sound for the DHA, he will help her get her son back. Reluctantly, she agrees.

In Alaska, Cruz introduces Lee to her team. Dr. Marin is a professor of folklore and mythology at Brown University, and the author of a comprehensive book that she has read on the legends of the ocean. He is modest and charming, unlike Meeks, who seems to know more about Lee than he should. Additionally, her old boss Bob Wainwright of the NOAA is accompanying them, having been kept in the dark on her involvement. Before either can protest, Marin points out that they can't leave, because they are on a submarine, descending at an inexplicable fifteen hundred feet per minute, thanks to the DHS' superior technology.

Soon, the sub arrives at their destination - a so-called "Ghost Rig." This is an illegal prototype oil rig that extracts oil beneath the surface of the ocean, on its floor, transporting the crude in heated steel pipes. The rig will be their base camp. Cruz admits that the recording he showed Lee was made by him on the rig. This comes as a surprise to both Marin and Meeks, who were told that they would be there to analyze a relic and a tissue sample respectively. Cruz concedes that all of these are true. This is the last straw for Lee, who demands to know just what exactly they're doing down there.

Her show of strength is thwarted when a scream comes from elsewhere in the rig, and Cruz opens the door to see two other agents - one of whom appears to be gravely wounded - followed by a number of scared oil-rig workers. They call for a medic, explaining that the wounded man had opened the tank for just a second. In the confusion, Lee sneaks off to follow the moaning sound filling the air, matching the sound Cruz had played for her. Down the hall, she discovers a room where some kind of merman is trapped in a tank of water.

100,000 years ago, a man makes cave paintings while the rest of his people war outside. When he is finished his drawing, he picks up a device, holds it up to his face, and screams in pain as it causes his eyes to explode in his head.

Retrieved from "https://heykidscomics.fandom.com/wiki/Wake_Vol_1_1?oldid=1473479"
Community content is available under CC-BY-SA unless otherwise noted.