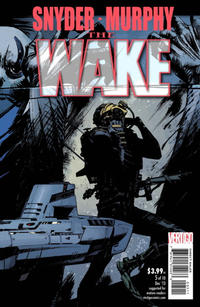 Now that the rig is dead in the water, that creature, all of them, they're moving on to the real prey.

Years ago, Lee Archer had been asked by her father what she planned to do with herself once she finished school. In response, she took him out onto the water at Dumas Bay one night and explained how, under the right conditions, phytoplankton rises to the surface at night, and glows. He acknowledges that the phenomenon is beautiful, but that it didn't answer is question. Lee admitted, then, that she had spent years of school studying the secret languages of life, and wanted to continue that as a cetologist. Amused that she would choose to be a poor seafaring girl, he couldn't help but comment that she reminded him of her late mother. They both suffered from a rare condition that prevented their tear-ducts from functioning properly. As a result, they both always had to squirt saline solution into their eyes. He used to tease Lee's mother that she loved the ocean so much because she had no salt water in her. As they sat parked in their boat, it began to rain, and a mournful cry began to fill the air.

Now, Lee is trapped with what little remains of the government's research team within the drill control room of the underground oil rig that was to be their base. What's worse is that they are being menaced by more than just the mermen that had driven them there in the first place. A massive merman has appeared, and it is shaking the drill at its foundations. Angrily, it shakes the control room violently, but stops in order to call on the thousands of other mermen for their chance to tear the small structure's residents apart. That, at least, is what those residents think. But instead, the larger merman leads all of its young away from the oil rig, and Lee realizes with horror what their real purpose is. Like whales and dolphins, the mermen were protecting their breeding grounds. The first merman had been sent to ensure that the oil rig was not a threat, and then destabilized it. With the rig dead, those creatures can now move on to their real prey, and attack the mainland.

Dr. Marin, the folklorist, realizes that this is the tale of the Hafgufa playing out. Most cultures have largely similar central myths about sudden and unnatural floods that bring man to the brink of extinction. The Sumerians had written of the flooding of Babylon, China had suffered a flood of endless boiling water, the Hindi Satapatha Brahmana had told of a storm that reduced the world to one roiling ocean. What if, Marin posits, these creatures outside have been at war with humanity since the dawn of civilization? Hoping for a chance to warn the mainland, Meeks begrudgingly admits that he has a vehicle on the rig, hidden away. It was designed for deep-sea hunting, and cannot get to the surface, but it might at least be able to get them away from the rig.

As they speed away, Captain Mackelmore demands to know what it was that Lee saw in her past. It's been clear, the way Lee has been drifting into her thoughts, now and again, that something about all this is stirring unwanted memories. Reluctantly, Lee explains that when she was twenty years old, she took her father out to Dumas Bay, and they had heard the call of that creature. Suddenly, their boat capsized, and Lee was pilled down into the water. At first, she thought she would drown, but then she saw people. They were the spirits of the dead, and they were beautiful. They were reaching out to her, and she felt they had something to say to her. She woke in the hospital, and the memory of that beautiful mystery drove her toward cetology. When she learned of the creature's hallucinogenic venom, though, she realized that that feeling had probably been forced on her. Now, though, she things it may have another meaning - it was a prophecy that she would see the Earth's population at the bottom of the ocean, drowned in this disaster.

As their vehicle begins to catch up to the school of mermen, Meeks activates his electrified shield, and draws the attention of the leader. Unfortunately, none of Meeks' attacks seem to work against it. Lee urges him to go down swinging, so Meeks blows half the hull, sending the creature sinking and bleeding. Unfortunately, they will be going down soon, too. Injured and dying, Meeks explains that there is a communicator in the control console, and that she can say her goodbyes to her son, while there's still time. Desperately, Lee calls her son Parker, but she finds him scared. He reveals that there are whirlpools happening all over the world, threatening to destroy everything. Worried, Lee warns him to go to his father for help from her old boyfriend Dr. Robinson, and then to gather supplies for survival. As the screen goes darker, Parker worries that he will never hear from his mother again, and she assures him that she will always be talking to him - he just has to keep listening.

It took only one day for the creatures to sink the coastal cities. Though they eventually overran most of the mainland continents with water, it was not the end of the world. It was just the beginning.

Retrieved from "https://heykidscomics.fandom.com/wiki/Wake_Vol_1_5?oldid=1473487"
Community content is available under CC-BY-SA unless otherwise noted.