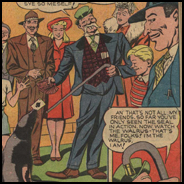 Fittin' I calls it! Most fittin' for the Hangman to wind up on the gallows! 'Ows it feel, Hangman?

The Walrus was a street performer who would pickpocket his audience. His "slight of hand" impressed a mob boss, and so, he was encouraged to be part of his gang. He was hired to knock off the rival gang leader, however, the Walrus double crossed his new boss, and killed him and the other gang leader. This pitted the two gangs to fight it out. Fortunately, the Hangman witnessed the killings, and was able to apprehend him.

Walking Cane: used as a blow dart gun, and the handle hides a small dagger.

Retrieved from "https://heykidscomics.fandom.com/wiki/Walrus_(Earth-MLJ)?oldid=1586023"
Community content is available under CC-BY-SA unless otherwise noted.