Start a Wiki
The first incarnation of the Disney anthology television series, commonly called The Wonderful World of Disney, premiered on ABC on October 27, 1954 under the name Disneyland. The same basic show has since appeared on several networks under a variety of titles. The show, under its various names, reputedly holds the record as the longest showing prime-time program on American television (though technically Hallmark Hall of Fame holds that distinction).

Originally hosted by Walt Disney himself, the series presented animated cartoons and other material (some original, some pre-existing) from the studio library. The show even featured one-hour edits of such then-recent Disney films as Alice in Wonderland. This is significant because the series was the first one from a major movie studio. Other studios feared television would be the death of them.

The show spawned the Davy Crockett craze of 1955 with the miniseries about the historical American frontiersman, starring Fess Parker in the title role. Millions of dollars of merchandise were sold relating to the title character, and the theme song, "The Ballad of Davy Crockett," was a hit record that year. Three historically-based hour-long shows aired in late 1954/early 1955, and were followed up by two dramatized installments the following year. The TV episodes were edited into two theatrical films later on.

On July 17, 1955, the opening of Disneyland was covered on a live television special, Dateline: Disneyland, which may be seen as an extension of the anthology series but is not technically considered to be part of it. It was hosted by Walt along with Bob Cummings, Art Linkletter, Ronald Reagan, and featured various other guests.

The series moved to NBC in 1961 to take advantage of that network's ability to broadcast in color. In a display of foresight, Disney had filmed many of the earlier shows in color, so they were able to be repeated on NBC. To emphasize the new color feature, the series was re-dubbed Walt Disney's Wonderful World of Color and retained that moniker until 1969. The first NBC episode even dealt with the principles of color, as explained by a comical character named Ludwig Von Drake, a bumbling professor and uncle of Donald Duck. The character's voice was supplied by Paul Frees (After his death, Corey Burton took over to replace him as the role of Ludwig Von Drake).

When Walt Disney died in 1966, no one replaced him as host, as everyone agreed that his presence, characterized by a warm, folksy persona, was irreplaceable. The series, retitled titled The Wonderful World of Disney in 1971, continued to get solid ratings, often in the Top 20, until the mid-1970s. At this time, Walt Disney Productions was facing a decline in fortunes, with declining box-office revenues. It also did not help that CBS had placed 60 Minutes directly opposite it. The show continued to slip in the ratings until NBC cancelled it in 1981. An attempt to modernize the show in the fall of 1979 was purely cosmetic with the shortened name Disney's Wonderful World. Much of the decline is often attributed to the declining amount of new material. The show became increasingly dependent on airings of theatrical features and cartoons and reruns of older episodes.

CBS picked up the program in the fall of 1981 under the umbrella title Walt Disney and moved it to Saturday night; the format remained unchanged, and ratings were marginally improved. It lasted two years there, its end coinciding with the birth of The Disney Channel on cable TV. While ratings were a factor, the final decision to end the show came from then-company CEO E. Cardon Walker, who felt that having both the show and the new channel active would cannibalize each other.

After the studio underwent a change in management, the series was revived on ABC in 1986, under the title The Disney Sunday Movie including a Disney castle (in the summer, the series was temporarily titled, "Disney's Summer Classics"), with new CEO Michael Eisner hosting. His presence arguably couldn't compare with Walt's (Eisner himself is said to have required 68 takes in his first introduction), and the show moved to NBC in 1988 before ending in 1990.

The series was revived again on ABC in 1992 after Disney purchased ABC, where it ran on Sundays until 2003, when it moved to Saturday night; it continued in that time slot until 2005. It then ceased as a regular series, due in part to premium pay-cable rights currently held by the Starz! movie network. Since 2005, Disney features have been split between ABC, the Hallmark Channel, ABC Family Channel, Disney Channel, and Cartoon Network via separate broadcast rights deals. It currently airs periodically as an anthology series similar to Hallmark Hall of Fame with features such as the December 2005 revival of Once Upon a Mattress.

Reruns of the shows were a staple of the Disney Channel for several years under the title Walt Disney Presents (which used the same title sequence as the 1980s CBS incarnation), when it was an outlet for vintage Disney cartoons, TV shows and movies, basically serving the same function that the anthology series served in the days before cable. When the channel purged all vintage material as of September 9, 2002, this show went with it. However, a few select episodes can be found on VHS or DVD, with the possibility of more being issued in the future.

All of the episodes from are listed in the book The Wonderful World of Disney Television, by Bill Cotter, published in 1997.

The original format consisted of a balance of theatrical cartoons, live-action features, and informational material. Much of the original informational material was to create awareness for Disneyland. In spite of being essentially ads for the park, entertainment value was emphasized as well to make the shows palatable. Some informational shows were made to promote upcoming studio feature films such as 20,000 Leagues Under the Sea and Darby O'Gill and the Little People. Some programs focused on the art and technology of animation itself.

Later original programs consisted of dramatizations of other historical figures and legends along the lines of the Davy Crockett mini-series. These included Texas John Slaughter, Elfego Baca, and Francis Marion, the "Swamp Fox."

Also included were nature and animal programs similar to the True-Life Adventures released in theatres, as well as various dramatic installments which were either one part or two, but sometimes more.

This format remained basically unchanged through the 1980s, though new material, as discussed earlier, was scarce in later years.

When the show was revived in 1986, the format was similar to a movie-of-the-week, with family-oriented TV movies from the studio making up much of the material. Theatrical films were also shown, but with the advent of cable television and home video, they were not as popular. The 1997 revival followed this format as well, with rare exceptions. A miniseries entitled Little House on the Prairie ran for several weeks under the TWWOD banner. Incidentally, one offering in this ABC revival, the 1965 theatrical film version of The Sound of Music (aired generally during Christmas time), was actually released by 20th Century Fox, not Walt Disney Pictures, although it was allowed to air under the "Wonderful World of Disney" banner. Films from the Harry Potter series also occasionally aired under the banner even though they were released by Warner Bros.

During the late-1980s and early-1990s, episodes of The Wonderful World of Disney was syndicated to local stations in the US. 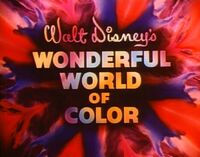 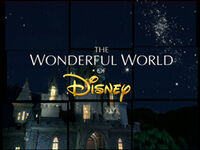 Retrieved from "https://heykidscomics.fandom.com/wiki/Walt_Disney_anthology_series?oldid=1579398"
Community content is available under CC-BY-SA unless otherwise noted.