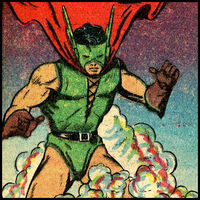 I don't need evidence. I have my own way of dealing with murders like you!

-- Bob Phantom prior to throwing villain Joe Chizzler out the window. src

Walt Whitney was a reporter wrote an opinion column called On Broadway for an unknown New York City newspaper. He also did some radio reporting in his early appearances. In his column, he tended to promote his costumed alter-ego's exploit and mock the NYPD for its failure to fight crime effectively.

It is unknown how Walt Whitney gained his superpowers to become the crime fighting spook known as Bob Phantom.

Teleportation: with a rush of wind, a swirl of smoke, and he appears.

Has been known to carry smoke pallets

Retrieved from "https://heykidscomics.fandom.com/wiki/Walter_Whitney_(Earth-MLJ)?oldid=1581729"
Community content is available under CC-BY-SA unless otherwise noted.