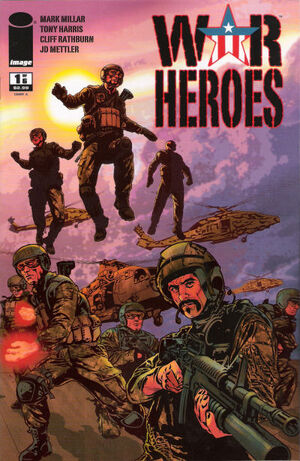 Appearing in "The Long War"Edit

Synopsis for "The Long War"Edit

Set in an alternate timeline during the coalition wars in Afghanistan and Iraq, the detonation of a nuclear bomb in Washington D.C. prompts the United States administration to expand the coalition War on Terror to include Iran, as well as institute martial law in the United States. As American casualties increase, including several terrorisms inside the U.S., morale and public support declines with the economy, reducing America's standing in the world. Lacking the necessary recruits, the US Military boosts enlistment by distributing pills to its soldiers which confer upon them various superpowers, tipping the scale in the war.

Retrieved from "https://heykidscomics.fandom.com/wiki/War_Heroes_Vol_4_1?oldid=1625343"
Community content is available under CC-BY-SA unless otherwise noted.