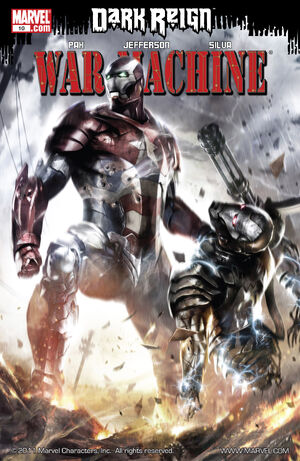 I considered a major celebrity death. Maybe just a few shark attacks. But in the end, I decided that the most enjoyable distraction of all...would be the war crimes trial of the terrorist and traitor James Rhodes!

Rhodey in the middle of a stroke. Osborn is ready to bend the docile Ultimo to do his bidding, which includes killing Rhodey. H.A.M.M.E.R. agents then set up Rhodey for transport. However, Glenda uses a codephrase, "Briar Patch", to end the stroke simulation, enabling Rhodey to assimilate the tech of the H.A.M.M.E.R. transport and agents' weapons, making a massive War Machine armor. Osborn attempts to attack, claiming that he allowed Rhodey to assimilate his armor so that he could access Ultimo. Therefore, Rhodey punches him away. He then assembles a craft for Suzi Endo, instructing her to take Ultimo off-planet and teach it right from wrong, otherwise he'll have to kill it, to which she agrees. Barton takes this as proof to his fellow West Coast Avengers that Rhodey did have good intentions all along. However, Rhodey informs them that saving Ultimo was just a side mission. He tells them that there is a real job that he wants them to do. As soon as his former teammates depart, Osborn makes a comeback, puncturing a hole in his armor. Unfortunately, Rhodey can't repair it, as Osborn has managed to find a way around his assimilation tech. Glenda urges him to run and fight another day, to which he refuses, seeing himself as only a soldier, who was never meant to have such power. Thus, he does a sole dog-fight against H.A.M.M.E.R.

Jake Oh, War Machine 02, comes to the Sheriff William Sampleson's office, in Campville Louisiana, accusing him of kill seven hurricane survivors three years ago; he has the evidence to incriminate him; Bethany Cabe, War Machine 01, exposes a prison holding untreated influenza detainees in Bunsen, California; Barton and Mockingbird spread countless dollar bills to the public from an insurance company that had been holding the money illegally; Wonder Man exposes that a lagoon was toxic.

All of these minor crimes have been exposed to the public at large, though Osborn considers it minor. He and his troops then destroy the giant War Machine armor, before taking Rhodey into custody, preparing to place him on trial for war crimes.

Retrieved from "https://heykidscomics.fandom.com/wiki/War_Machine_Vol_2_10?oldid=1471742"
Community content is available under CC-BY-SA unless otherwise noted.