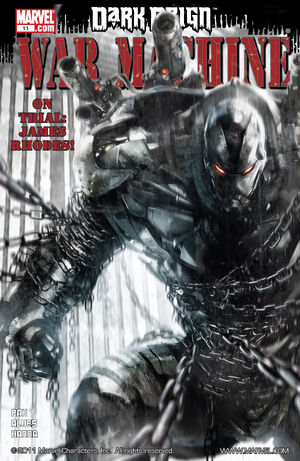 Marvel's Trial of the Century begins in “War Crimes” Part 1! After ten issues of taking on madmen and monsters around the globe, War Machine's quest for justice has finally forced the world to take action. But it's not the genocidists of Santo Marco or the murderous leaders of Eaglestar International in chains in the courtroom -- it's War Machine himself! Find out where the biggest heroes in the Marvel Universe stand when the whole planet calls James Rhodes a criminal in the series that Wizard calls “the book to beat when it comes to badass action and international espionage.”

Portland, Oregon is the place where Victoria Hand was transferred to after she sent a letter regarding her views on the war on terror to Nick Fury (see Dark Avengers #11).

Retrieved from "https://heykidscomics.fandom.com/wiki/War_Machine_Vol_2_11?oldid=1739641"
Community content is available under CC-BY-SA unless otherwise noted.