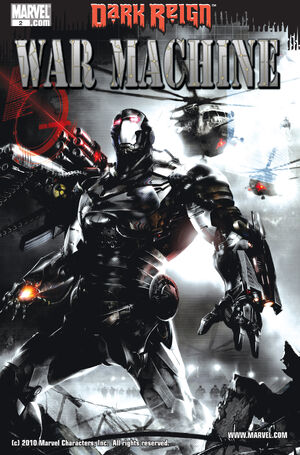 Bethany Cabe at the War Machine R & D Facility coordinates with Parnell Jacobs aboard the Stark Satellite. They determine that the location of Parnell's missing wife, Glenda Sandoval, is in the Middle-Eastern nation of Aqiria. She is being held by a U.S. defense contractor outfit called Eaglestar International. They transmit the coordinates to Jim Rhodes who flies to Aqiria in his War Machine armor.

Eaglestar's CEO, Davis Harmon, is ready for War Machine though. As soon as he enters company airspace, they open fire at him with a barrage of Nike missiles. War Machine counteracts everything Eaglestar has to throw at him. The assault takes its toll on Rhodey's systems however, and his cybernetic legs are blown off. The mercenaries converge on his position, convinced that he is nearly dead. Rhodey assimilates his head and torso into the frame of a WR-50 tank and continues the fight. He fires a Roxxon flash pulse that temporarily blinds all of his opponents, enabling him to rescue Glenda. War Machine is ready to kill everyone responsible for her imprisonment, but Sandoval insists that these men should live to stand trial.

Meanwhile in New York, H.A.M.M.E.R. director Norman Osborn learns of the fiasco in Aqiria. Enraged over the sudden turn of events, he decides to implement "Plan B". Osborn sends the Dark Avenger, Ares, to Aquiria. Ares rhetorically muses to himself, "Why send a War Machine... when you have a War God?".

Retrieved from "https://heykidscomics.fandom.com/wiki/War_Machine_Vol_2_2?oldid=1471734"
Community content is available under CC-BY-SA unless otherwise noted.