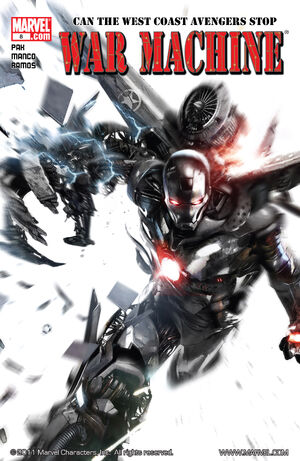 Come on! Haven't you seen "Wall-E"? Not every robot's necessarily evil.

Ronin and Mockingbird are flying the Quinjet to intercept War Machine. Though Ronin is willing to believe that their former comrade from the West Coast Avengers is doing the right thing, Mockingbird contradicts him by pointing out that Rhodey let a polar bears eat a Roxxon executive, gunned down twenty-six soldiers in Santo Marco, ripping through an Indian reservation and destroy a U.S. army base. Nonetheless, they decide to stop him. They happen upon him as Rhodey is about to break into an in-flight plane to extract his target. Tigra leaps from the Quinjet on Rhodey's shuttlecraft and knocks Suzi Endo and Parnell Jacobs unconscious. Outside, Wonder Man flies up and fights against Rhodey. He defeats the former before confronting Ronin, who has an EMP arrow at the ready, declaring that they should work as a team; Rhodey acknowledges this and fires at the arrow, disassembling both aircrafts. As Simon goes to rescue his and Rhodey's friends, War Machine assimilates the technology necessary to carry out his mission. However, Ronin fires an arrow attached to a rope at Rhodey's armor and demands to know what he is doing otherwise he ain't going anywhere; Rhodey answers his question by informing them of Ultimo. Suzi explains the situation to everyone: the U.S. government attempted to experiment on Ultimo and separated its brain into three parts, the neural net, memory banks and emotional core to develop. Already the CEO of Stark Solutions is drinking a vial containing Ultimo's neural net. Though Ronin is skeptical, he starts to believe when he sees liquid metal burst out of the front of the plane. Inside, the metal is engulfing its consumer. The Avengers then get in and evacuate the civilians to the back of the plane, as Wonder Man and Rhodey cut the plane in half, attaching its turbines to the rear, creating a makeshift Helicarrier. Rhodey then goes to fight Ultimo, who has grown from a men into a massive blob of liquid metal. Suzi then detects Ultimo making wireless signals to locate the rest of its brain, which Rhodey previously destroyed.

Rhodey attempts to fight Ultimo without hurting who he believes to be his friend Tony. However, the man reveals himself to be in fact Tony's jealous cousin, Morgan. He had finally achieved to become so much better than his genius cousin, only to become like Ultimo. Deciding to follow Ultimo's directive to destroy all life, he reveals that he's go a better plan to do it. Rhodey is able to bring him down with the new eye beams he gained a few days ago from fighting Ultimo's head, humbling Morgan. Rhodey then tries to offer his assistance to him, only for Morgan to infect him with Ultimo's mass, breaching the War Machine armor, before self-destruction, leaving specs of liquid metal everywhere. Suzi assures everyone that the substance is nonbinding with human tissue. However, Tigra points out that it isn't doing so well for the plants.

Watching this on a viewscreen from Avengers Tower, the Iron Patriot tells Victor Hand to cancel his appointments for the day.

Retrieved from "https://heykidscomics.fandom.com/wiki/War_Machine_Vol_2_8?oldid=1471740"
Community content is available under CC-BY-SA unless otherwise noted.