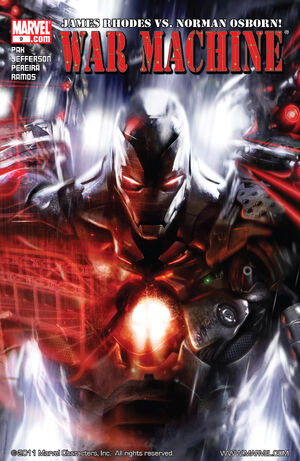 Rhodes, this is ridiculous! You can't seriously want to let that thing look inside my head!

An elderly couple's iPod is interrupted by a message from Ultimo/Morgan Stark, explaining that his plan to eliminate all life on Earth by converting any vegetation into metal which would cease the oxygen cycle and suffocate all life that breathes or kill any life from anything pointy. Luckily for the couple, War Machine uses his flamethrowers to ward it off. However, Ultimo is tormenting him with all the pain and suffering he had seen. Osborn is also watching this calls to Suzi Endo to demand what on Earth is going on. More specifically, he wants to know what War Machine is doing. Suzi explains to him that Rhodey is bonded to the Ultimo tech and any attempt to remove it would kill him, but Osborn doesn't care and attacks. Rhodey tries to explain to him that as long as he's bonded, he can attempt to talk with him. Osborn corrects him that Ultimo is in it. Rhodey responds by assimilating a Roxxon crane onto his arm to swat him away. Then he hacks the Iron Patriot armor but refuses to kill him. However, Ronin and Wonder Man don't have a problem; the former disable Osborn with an EMP arrow. He tells Rhodey that they can say Ultimo got him; the problem is, Ultimo is attacking. Already the robot had adapted to their strategy of using fire by sending spores of itself past the barriers. Rhodey then assimilates the Iron Patriot armor to fight Ultimo's hand. He then bonds again with Ultimo's neural net to show it all the people he saw and those who saved him. However, Morgan says that Ultimo knows the tragedy follow and isn't convinced. So Rhodey forces Osborn to show his memories: that of first holding his son Harry. This causes Ultimo to become docile and release Morgan. However, Osborn takes advantage of this by blasting Rhodey and then beckoned for Ultimo to come to him.

Retrieved from "https://heykidscomics.fandom.com/wiki/War_Machine_Vol_2_9?oldid=1471741"
Community content is available under CC-BY-SA unless otherwise noted.