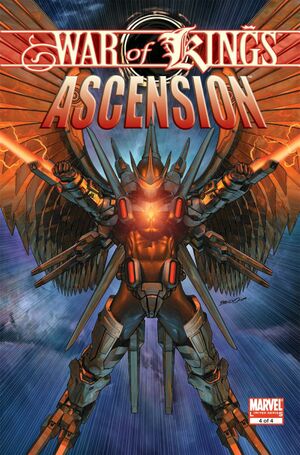 What happened at the end of WAR OF KINGS #4, and what did Darkhawk have to do with it? Only Chris Powell knows the terrible deeds the Fraternity of Raptors will carry out to protect their so-called “Great Purpose”, but who will believe or trust the paranoid warnings of a lone young Earthman? The entire universe thinks he’s committed an appalling crime—and now Darkhawk is cosmic enemy #1!

Retrieved from "https://heykidscomics.fandom.com/wiki/War_of_Kings:_Ascension_Vol_1_4?oldid=1648687"
Community content is available under CC-BY-SA unless otherwise noted.