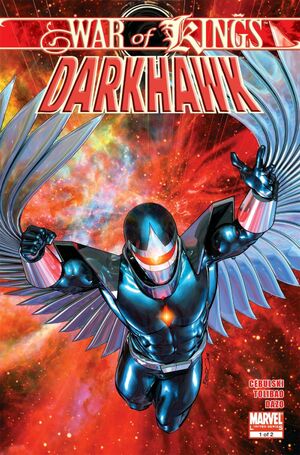 My name's Chris Powell. All was good in my world. Until it wasn't.

At one point Darkhawk was hired as Security Chief of Project Pegasus, an exotic energy research lab which also houses several energy based super villains. In trying to capture the escaped Vector, Darkhawk's power acted up, when Vector tried to remove the Amulet of Power from his chest, blasting Vector near death. When Doctor Necker came up from behind him, Darkhawk unconsciously lashed out at her. Dr. Necker suggested to study the Amulet but Darkhawk immediately ran out of the facility.

Chris Powell went back to his friends for help especially his ex-girlfriend Mickey Musashi. As they were talking, Chris Amulet began glowing hot and suddenly, a ball of fire crashed in the backyard of Chris. The ball of fire was actually an alien who appears similar to Darkhawk. The barely conscious alien touched Chris' amulet in his hand, and Chris immediately transformed into Darkhawk. Before the alien could answer Darkhawk's question, a ball of fire from space fell on the alien and also destroying Chris' house where his mother and sister were still inside.

Retrieved from "https://heykidscomics.fandom.com/wiki/War_of_Kings:_Darkhawk_Vol_1_1?oldid=1471756"
Community content is available under CC-BY-SA unless otherwise noted.